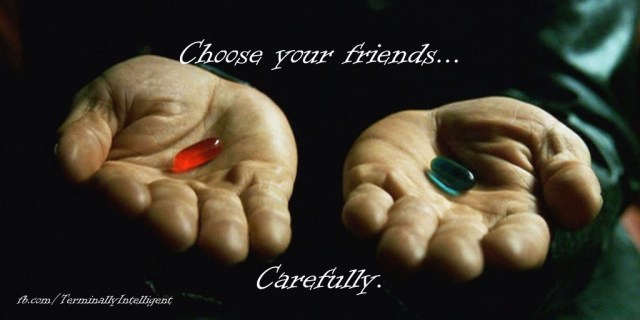 I just want to thank the people in my life who love me. It’s not always easy to love someone. It’s not always easy to love someone who’s made a lot of mistakes in life. I’ve said and done some stupid things, and I’ve been hurt by people I thought I could count on. It goes both ways. I finally got sick of my own shit about eight years ago. I was tired of being a little flaky. I was tired of not being anyone’s best friend. I set out to make changes.

For the first year, I pulled inward. I was homeless for a pretty long time there, and I didn’t want to be anyone’s burden. I worked, I saved money, and I kept to myself. I worked hard to be better to my family, and I hoped they’d do the same. I gave up on friends who gave up on me. I just chilled for a while. I made some passing friends, but nothing lasting. I wasn’t trying to, not yet. I set standards for myself I’d never imagined before. I gave myself a foundation.

Most of the second year was spent moving forward. I went back to school, entered a relationship, and started seeking friendship. I kept working hard to be a good brother, for the brothers that would have me. I worked hard to be a better friend. I shared my class notes with everyone, and I recorded most of my classes, so people would copy them off onto flashdrives. I was a positive person in these folk’s lives. It was awesome.

The third year was more college, and closer friendships. I got burned a time or two, though. Someone started selling my recordings. I was implicated for this offense, one that could have resulted in my expulsion, and had to stop distributing my notes and recordings. Many people bailed. Folks who were friendly before now walked by, uninterested. I was popular when I was helping everyone for no reason. I was not popular when I had to be careful. But a couple of folks stayed around. These are people I’m still in touch with. Good folks, good friends.

The fourth year started great. By the end of the school year, though, things were on edge. My father died, and I had a hard time dealing with it. Some people flaked off. I can’t blame them. As the summer went on, the problems increased, until few people wanted to spend time with me. When I split up with my ex, one friend helped me move across the country to live with my Dad. True friendship from both of them.

The fifth year, I spent most of my time trying to make any friends at all, and ended up spending too much time with people who took advantage of me, and made me feel like I wasn’t good enough for them.

The sixth year, I gave up on bad news. I started only spending time with folks at parties, or in groups. I met a LOT more people, and found a loose support network, full of kind folks. I met Jenny. I met George. I also met a couple of other badasses who prefer to not be discussed on my blog because of their very visible statuses in the world.

Then I met a friend Sven. Sven is this adorable guy, who has been friends with Jenny for years now. He is a transgender male, and had whittled his friendships down, and built them back up again. I was invited to his wedding solely because Sven trusted Jenny’s judgement. It was great for everyone. I connected with some great people, and I learned a powerful lesson.

There are differences between “acquaintance”, “contemporary”, “coworker”, “neighbor”, and “friend. Just having a role in my life isn’t enough to be my friend. Sven employs the Friendship Contract. He literally has his friends sign a document defining their relationship. It made me think about the people I considered friends, and whether they deserved that label.

I sat George down a few weeks later, and had a conversation with him in this regard. I told him I wasn’t looking for something like a friendship contract, but that I did want to be better friends along those lines. He didn’t answer immediately. I gave him time to think about it. Not long after that, I received a text, “I’m in.” I did the same with another friend, and we began having weekly game nights not long after that. We all made an effort to be better friends. They didn’t know each other terribly well at the time, but they became great friends too.

That third friend moved away last year, after a great job opportunity came knocking on his wife’s door. It was a great choice for them, and for their daughter. I didn’t make a point of trying to make another close friend. I still had him and other long-distance friends. I still had Jenny. I still had George.

But now… Now I don’t have George. Jenny is everything I’ve ever wanted in a best friend, partner, you name it. But sometimes the situation calls for something more. I find myself lacking. I do have local friends. I’m having trouble putting myself out there again, though.

George was the third person I had that close a relationship to (not counting Jenny), and he was the third of them to die too soon. I feel haunted by the deaths of those friends, and I don’t feel like I can be a very good friend right now.

For my friends who read this blog: Don’t read into this. I love you all. I’m just a bit scared to open up like that again. For the folks who came to my wedding, rest assured that your invitation was a permanent commentary of our never-ending friendship. But it’s hard not being able to have a drink with you guys. I feel a lack I’m not asking anyone to fill.

I’m just asking myself to try again. I hope it works.