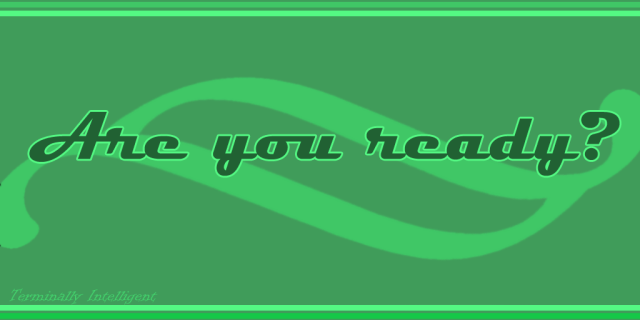 Saturday, Jenny and I went out to a potluck to enjoy some friendly company. I squared myself between a good friend (Red) and my wife, and enjoyed being ensconced in a safe place at the party. While I was distracted by my attention-whore of a phone, the subject of Red’s mother’s death came up. I was not, in any way, prepared to hear that story.

Red described finding her mother in bed. She’d fallen asleep, and didn’t wake up. She described how her mother looked, and it was eerily similar to how I found George less than two months ago. I found myself sinking further back into my chair. At one point, I tried to latch onto a comment, and move the conversation in another direction. I failed miserably.

Sometimes, I’m very glad for my disassociative tendencies. My brain and my body stepped away from each other, and I was able to carry a smile until the topic changed. A few minutes later, an acquaintance was showing everyone her new nose ring. It was pretty, simple, and pleasing to the eye. She’d made a good fashion choice. Then I heard Jenny tell the party that I have a nipple piercing.

It was on. The looks folks gave me were everything I needed to make it through a recovery conversation. I regaled them with saga of my piercings.

When I was 19, I found myself firmly of the opinion that looking at breasts in a piercing parlor while a friend got her eyebrow pierced was a great way to pass the time. I mean, come one, boobs! Amirite? But instead of bring a gross dude, I found myself entranced by the art. The piercings were beautiful and there were hundreds of kinds of rings. I decided to have my left nipple pierced.

The folks at the parlor convinced me to have both nipples done. Most folks, they said, came back to have the second one done eventually. I saw the logic in that, and knowing my own preference for symmetry, I agreed. One problem: The right one looked funny. I kind of hated it, and when the rings somehow came out in my sleep (I’m still not convinced my ex didn’t pull them out), I let it go.

Fast-forward a few years. At this point, I’d had my lip pierced, my eyebrow pierced twice, and three tattoos. I got my left nipple pierced again. It healed super fast, and I’ve not regretted it. I can’t say the same for my tongue piercing. After I received a promotion, I removed it, because my clients were weirded out by it. Whatever.

Now faced with a captive audience at the potluck, I told them about my fourth tattoo. It’s on my chest near my left shoulder and underarm. During the tattoo, I say to the artist, “Are you playing with my nipple?!”

I couldn’t see what he was doing, but it felt like this weird guy was pulling on my nipple. He said he wasn’t, but I obviously didn’t look like I believed him. My father had been there (he actually paid for that one), and he assured me that the guy wasn’t screwing with me. The guy told me that there was a nerve bundle under my arm there, and that the vibrations and pain from the needle could cause some radiating sensations. Fair enough, but it really did feel like I had this needle-perve playing with my nipple, and it wasn’t pleasant.

This got all the appreciative laughter and mood lifting I could hope for. But it didn’t stop the nightmares that came that night. Guilt and shame chased me through the night. Anxiety and anger left me exhausted, even in my dreams. I woke up none-too-rested. Not my best night.

I have therapy on my normal day this week, but in the meantime, I have all of you to talk to. I hope you all have peaceful dreams this week. I’m going to make a plan with Jenny and my therapist to help me figure out how to help myself when I’m in a situation like that again. I want to be ready. George deserves to not be a source of fear and anxiety for me. He’d never want that, and neither do I. See you tomorrow.