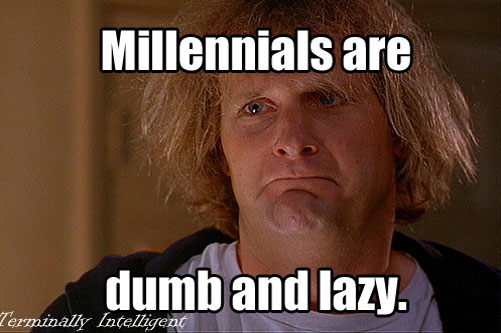 I get a little bent out of shape on the subject of my generation. The millennial generation is made up of anyone who became an adult during or after the year 2000. We are mocked as a generation of stay-at-home losers who can’t keep jobs. We are generally regarded as under-educated, lazy, and overly dependent on government assistance.

Let’s start with the history of our generation. We are struggling through a war that began in our youth, before most of us were adults, before we could start college. Thousands of us rushed to defend our country from its devastating blow. The number of high school students who went to college tanked. It recovered, albeit slowly.

The Recession hit most of us while we were in college. We are still in that Recession. It might be getting better for the overall economy, but I promise, it hasn’t trickled down yet. Thousands and thousands of American students dropped out of college, unable to afford it. Those that stayed took loans, worked as much as they could, and still came out drowning in debt.

During the 2000’s, an estimated 3 million jobs went overseas. Those jobs haven’t come back. The auto industry is just about dead, Walmart is coaching its employees in the art of getting food stamps, and Millennials are stuck with part-time minimum wage jobs, unable to support themselves, much less pay off the crippling debt we’ve racking up.

Oh, and speaking of debt? There’s a reason Millennials are so keen on health care reform. It costs thousands of dollars to have a food allergy. It costs tens of thousands of dollars to have a mental health crisis. Without government assistance, millions of mentally ill young people went untreated, and the state of the economy, a lack of prospects, and a lack of treatment has resulted in too many dead young people.

Oh, and the general consensus of our professional peers that we are too damned lazy, and if we work hard enough, we can make it? That’s a big pile of horseshit, and I’ve been living in that stinking pile my entire adulthood.

I can’t tell you how many employers I’ve had who were baffled that I’ve had three or four jobs at the same time most of my adult life. I’ve swept parking lots and picked weeds while working in a candy factory and bagging groceries at a local Kroger. I’ve been a caregiver, a desk jockey, a writer, a transcriptionist, and an understudy over the last two years alone. I have been in management, on salary, and still working odd jobs because of my crippling debt.

My CV is a warren of self-doubt and disenfranchisement. If I list all of my work experience, my employer would be overwhelmed with a horde of part-time contract jobs, a constant string of lay-offs and position eliminations. We can’t afford to go to college, so we work. We don’t have a degree, so when our employers make budget cuts, we’re the first to go. When we try to recover, employers shake their heads at the fact that we work at Subway, McDonald’s, and at a local gym, just so we could pay the bills. Then they want you to quit your other jobs while you intern? Fuck that noise. Kids gotta eat, and I don’t have time to work for free for the chance to earn an entry-level minimum wage job.

I’ve been homeless twice. Both times I was in college. Once, I was in an abusive relationship, and had to drop out and move to another state to be near a support network. The other time, I was unceremoniously kicked out of my home by a landlord who knew I couldn’t sue him. He threw my stuff on the curb, and I had to call out of work to pick it up in the rain, and put it in a friend’s garage. I lost my job because I was too poor to fight for my one-room apartment above a garage. But I didn’t give up. I just went to school the next morning, and hit the pavement until I had a job.

Millennials are strong, self-empowered young people, determined to make it work. I thank God that I have work. I thank my friends and family for their support over the years to help me get here. I also work two jobs, and contract with local offices whenever I can. When someone emails me and says, “Can you have this assignment done in two days?” or an agent asks for a book proposal in a week, I don’t get to say no. That’s not a choice. It doesn’t matter if I sleep, or practice healthy eating habits. When there’s extra work to be had, I have to take it, do it, and get paid. The work’s gonna be taken by somebody, and you can bet your sweet ass that this Millennial is doing everything he can to bring home enough money to buy LEGOs for his kids.

Now, if you’ll excuse me, I’m going to take the dishes out of the bathroom sink. When I went to bed last night, at 3:00, I found myself brushing my dishes instead of my teeth. And that’s not even the strangest thing I’ve done in a work coma. But it’s worth it.