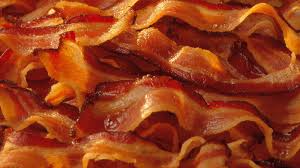 Jenny and I have our ups and downs with food. We like different things, and the kids have their preferences too. This is usually not a huge problem, because we are all willing to try new things. Except the Boy. More than half the time, he just goes straight for the PB&J.

Tonight, we tried bacon-filled cinnamon rolls. It was disgusting. Everyone agreed that for this one thing bacon actually made it worse. It was a bad waste of good bacon.

Our biggest problem was likely the thickness of the bacon. It didn’t cook well, and added significant amounts of fat/grease to the mix. This meant that the bread didn’t cook up either. I topped it off with frosting made with WAY too much milk, producing a thin glaze, which nobody liked at all.

Oh well. We will eat what we made, because we don’t waste food, but gross.