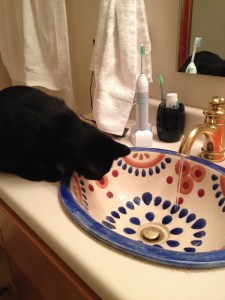 He may figure out the handle any minute. Then we are fucked.

When we first got our kittens, we decided to try bathing them while they were young, so they could tolerate water. For Lavinius, this was a disaster. Dude was ready to stab someone with a fork. That didn’t last long at all. With Ezra, though, it was a totally different story.

We bathed him 5-8 times a day when we first got him, because he was so darn helpless, and kept getting poo and formula everywhere. He got used to the water really quickly, and never complained about it too much. We were so relieved. Every time we’ve had a cat-bathing emergency (never) he’s been ready.

New problem: He likes sinks. I mean, what cat doesn’t like sinks, right? No. This cat is obsessed. He doesn’t like water out of a bowl. He wants it out of the faucet. If you go into the bathroom for anything at all, he is on the counter, in the sink, and looking at you expectantly before you can even close the door. God forbid you just need a tissue. He will glare at you for several minutes, patiently waiting in the sink.

We’ve made every effort to not be “trained” by him. We don’t turn on the faucet just for him, etc. When he has tried to go in the showers, we’ve let him, though. When he tried to climb in the toilet, I let him try. He changed his mind once he got up there, thank God! But he does still like to watch me pee. Hey, he’s a cat, whatever.

But now, it has gone too far. For weeks, I’ve been picking him up, setting him on the floor, and then using the sink. Today, I gave up. I’m a quitter. He curled up in the sink, watched me get ready to brush my teeth, and firmly stood his ground. When it was time to spit, I spit. Not on him, just next to him, as close to the drain as possible.

He didn’t do shit. I rinsed, took my medication, and turned the faucet off. He didn’t move. I then moved on to my next phase: peeing. As soon as I started peeing, he was ready to go. He lept into “watch him do ALL the peeing!” mode. Leaping wasn’t enough, though. When he landed, he got the shock of his life. His entire body was soaked. He didn’t have traction. He came flying at the toilet like “HOLY-SHIT-FUCK-CHRIST!”

I laughed so hard Jenny asked if I found my urine amusing. Not so much. I was doing everything I could to pass the ultimate test of manhood: aiming while laughing. It’s harder than you think, ladies! (Hehe. Harder) It takes skill to wiggle your waggle in the right direction! Add to that, the comedic shit-fest that was in the form of a toothpaste tinted black cat flying at the toilet, scrambling for dear life, while looking terrified at the great bowl of jelly that is your belly shaking so hard you might get stretch-marks!

Wow, that was a long sentence. I think German is rubbing off on me. In German, I think it translates to something like Angstzahnpastakatze. Or something. I don’t think the Germans even know how to translate “the comedic shit-fest that was in the form of a toothpaste tinted black cat flying at the toilet, scrambling for dear life, while looking terrified at the great bowl of jelly that is your belly shaking so hard you might get stretch-marks!”

Anybody know a German? Oh wait, I know several. And they all read this blog…. Wanna throw a crazy man a bone? Holla.