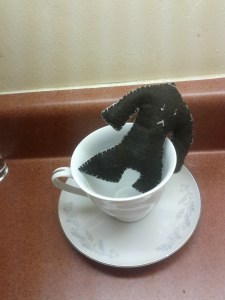 I kind of like being manic. It’s kind of zen, in a really excited kind of way. I miss it when it’s gone, because it’s like I’m missing my enthusiasm. I often long for just a “little bit” of mania. Just enough to get me going through a day or two.

Last day or two, I’ve been manic. Not just the “do all the things, you are immortal!” kind, but the paranoia inducing, anxiety fueled mania. Don’t get me wrong, I’m not huddled up in a ball, waiting for the police to kick down the door. It’s more like I have a different dose of weird.

We had a new friend over for game night this week, which was nice. Except, we don’t have new people over. It just doesn’t happen. I started inviting 2 people over, once a week, last year. That’s been the extent of that. I was a ball of anxiety the first couple of times, but it got better. Hopefully, that trend will repeat, because we invited her over again, and this week’s was an emotional disaster for me.

It was actually a lot of fun. We played Dominion, one of my favorite games, and had a ball. Everyone got into the competition, and all three of our friends consider themselves “hooked.” But between turns, I was anxious. My hands were shaking, and I couldn’t stop the mental chatter.

Hurry up, hurry up, fuck you are slow, why isn’t it my turn yet? God, I hope I don’t look as impatient as I’m feeling, everyone will think I’m a dick! Shut up brain, calm your tits, this isn’t okay. Look, it’s our turn. What was I going to do again? See? Fuck you. You’re impatient to play, but you are such a jerk, you forgot to plan your turn! Fuck this shit.

At that point, I went and got some anxiety medication. I don’t take anything strong, and I refuse narcotics, so all I had was a minor extra dose of one of my mood stabilizers. Before you get any ideas, I have a separate prescription for those, PRN for anxiety. I came back to the group, gave Jenny the look that says a million words, most of them being along the lines of,

I’m anxious, and I don’t want to talk about it. Why aren’t you asking about it? Don’t you love me? Fuck, if you ask me about it, I’ll have to talk about it in front of everyone. Don’t look at me… Look at the cat or something.

Then she says, “Anxiety?”

I nod and my eyes speak some more silent bullshit. Why the hell did you ask? Are you crazy? Thanks for caring, I love you too. Now, can we ignore the fact that I just took meds to help me in a social situation in my own home with my own friends? Yes? Thank God.

Jenny, of course, probably reads all that as, “Something’s wrong.” Then she asks about it, because she cares, and then she sees me nod, and reads my eyes for, “Thank you for being supportive.”

We invited our friend, and our other friends, over again for next week. Hopefully, I’ll remember to not drink any more caffeine.

Shit, I forgot to talk about the mania, because I got distracted by the anxiety. Fuck it, I guess I know what I’m writing for tomorrow…