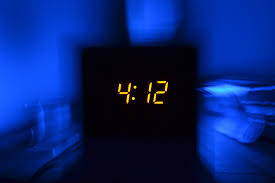 I slept like shit night before last, and now I’m paying the price. There are many reasons I lose sleep. Sometimes, it’s as simple as not wanting to go to bed. Other times, it’s a matter of not being able to sleep in general. Other times, I’m so anxious about actually falling asleep, I keep myself up with the help of mental chatter.

When I’m manic, I have to monitor how much I sleep and why I’m not sleeping. If I don’t make a conscious effort, I could end up going days without enough sleep, with a monumental variety of complications caused by the subsequent exhaustion.

In these cases, I don’t always want to sleep. I am just plain not tired. I am enjoying myself, and I can’t always rationalize the need for sleep, because I don’t feel like I need it. This is a pitfall that is hard to fight against, because I have to force myself to lay down, sometimes for hours, until I am sleepy enough to go under. Obviously, this is no friggin picnic.

Other times, I go to bed, and for some reason, my brain won’t shut up. I’ve had a few things to be anxious about lately, including some job applications, social stuff, and some minor health concerns. Last night, I started out fine, but as more and more time passed without falling asleep, my anxiety kicked in.

I was anxious about not being able to fall asleep, and because I was tired, I was not very rational, so it was difficult to moderate my anxiety. This just kept feeding itself, hour after hour. Sometime after 5am I fell asleep. Jenny woke me several hours later in the effort to get me going for the day. For the first time in years, I woke up with my head buried under several pillows, and the covers, with a stuffed animal or two on top for good measure.

Right away, Jenny asked if I was okay, and I confirmed that I was okay(ish), but that I hadn’t slept. We talked for a few minutes, and she offered to let me go back to sleep while she ran errands. It was too late. I was awake, and couldn’t go back to sleep thanks to the returning anxiety.

I ran errands with her in the morning, and by early afternoon, I was dragging ass enough that Jenny sent me back to bed. I slept for a couple of hours, and returned to my day. I never quite felt refreshed, but I fell asleep a little more easily last night.

On one hand, I’m glad it was just anxiety. Euphoric insomnia is so much harder to fight. At least this way, I am actually getting some rest, even if it’s not enough. I’m going to zombie crawl through the day, and try not to nap. Let’s see if I can.