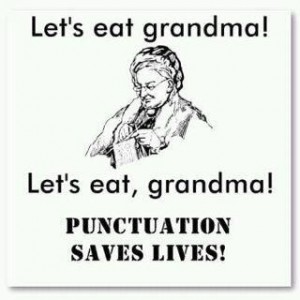 In our house, there are a few things that completely validate themselves. These things each get to be their own reason.

For example, if I want bacon, I have bacon. If anyone asks, why, I say, “Because bacon.” This normally suffices for many things. Chocolate, bacon, boobs, and penis are the favorites lately. At some point, I listed these things in a note for me to think about later.

In the meantime, Jenny and I had a row over serial (Oxford) commas. Apparently I don’t know how commas work. She is constantly telling me where they do and don’t go, but it never sticks. I used the points she made on some of my lists. I wanted to see which things came up to scratch. I had lists of subjects, skills, random verbs, and nouns. It was all fine. Except when it wasn’t.

One list included, “Lions, tigers and bears, oh my!” Not a big deal, you don’t get too much conflict there. It may be a tiny bit confusing for the person wondering why tigers and bears are separate from lions, but whatever.

The next list was, “Penis chocolate, bacon and boobs.” When I thought about this, I got the mental image of a chocolate-dipped ding-dong and a bacon grilled bosom. When I mentioned this to a friend, she asked, “Is that like bacon covered boobs, or like the sunburn you get from tanning without a shirt on?” I promptly tried not to throw up, while making a mental note to always put sunscreen on my moobs.

I have endeavored to integrate the serial (Oxford) comma into my writing habits to prevent further confusion and/or gag-inducing mental images. In return, I have habitually had “Oxford Comma” by Vampire Weekend stuck in my head. I’m in a sharing mood, so listen for yourself. It’s good tunes.