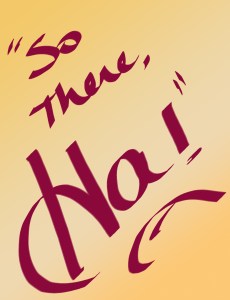 While spending time with a friend, I saw her kids get into a friendly dispute over the use of something. Probably a toy, or snack. They both presented their logic, and seemed to go nowhere. Out of the blue, the daughter said, “I asked for it first. So there, ha!” He conceded the point, and off she went.

When I first heard this, I laughed a little then stopped. It seemed rude and dismissive. I took my cue from the room, and realized that it had gone without remark or reproach. I moved on with my visit. A bit later, I heard my friend use the same phrase while talking to her daughter. “So there, ha!” I watched carefully for her daughter’s reaction. They were both smiling. Huge grins of respect and love passed between them, and the conversation was over with laughter.

The second time, it seemed a little less strange. Each time I hear it, it seems to become a little bit more funny in my head. It’s laden with both snark and joviality. It’s a friendly “because I said so” type of statement, except it normally follows another (true) statement.

Lately, I’ve found myself calling on that image for comfort. Seeing those two lovely ladies smiling at each other as they reached a friendly end to their conversation is a beacon of comfort for me. It has become an everyday phrase for me, but only in the literal meaning. I use it every day. It has not become “ordinary,” however. Anything but.

I use this phrase to do battle with my brain. We all know the phrase, “Depression lies.” Between Her Hilariousness The Bloggess, and His Awesomesauce Wil Wheaton, the whole mental health world now finds solace in this phrase. I would like to humbly submit this new phrase as an addendum. Use it as a clarion call, as a shield from your brain, or as your blazing broadsword of badass-dom. “So there, ha!”

You are a badass, and don’t you forget it. And I said it on the Internet, so you know it’s true. So there, ha!