Minutes after I wrote my last post, about not dealing well with other people’s emotions, a close acquaintance of mine, and sometime commenter, Also Living With Anxiety (ALWA), contacted me. No biggie, right? But I was very surprised at the contact method.

Normally, we just email, or comment back and forth on Facebook. He, his wife, and Jenny all are telephobic(ish). I am the only one who regularly uses phones. I don’t like it, but I do it. Jenny still has a slight fear of talking to me on the phone, actually. Anyway, as long as I’ve know them, they’ve never called us, and Jenny has never called them. But ALWA actually called, and Jenny panicked and handed me the phone. I calmly answered it, trying to not let concern leak into my speaking voice.

ALWA told me that his wife and kids had an appointment, and that he was having panic attacks. I knew what was coming. He asked if we could come over and keep him company while they were out. I happily agreed, and told him we would be there soon. Of course, he expounded on how awful it would be, and how his whole day was messed up, and that I might even see him crying and balled up in the fetal position on the floor. I said, “No problem, see you soon.”

We arrived fairly soon, and ALWA and I had a good visit while our ladies were out doing stuff. Jenny had gone shopping to maximize the efficiency of the outing, since we had a busy day. I was touched that he had called us, and then even more touched when he said it was fine for Jenny to go shopping, while the two of us stayed. I kept a close eye on him, and he had a couple of moments where he had to regain his composure. But, despite his insistence that he was going to be a burden, I actually enjoyed our visit. We talked about small things, and had a chance to bond a bit better, while I sewed some new dolls. 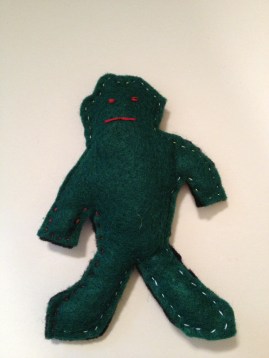 This is Fret. He is an anxiety doll I completed while hanging out with ALWA.

It was a good experience, and it was nice to be able to relate to somebody about our shared struggles, and be able to lend some insight to each other. I quite enjoyed the disruption in my routine. Also, it was a convenient excuse to have Oreos and a cola for breakfast. I had to get there in a hurry, right?

Anyway, I think it’s important for me to remember that when people fall apart, it’s not always a bad thing. And just being there can help me open myself up to others, and start looking for those “natural” responses I’m trying to learn.

It was a good day. Carry on, dear reader.