I have a couple of odd memories to share with you, and an odd habit I’ve formed. Enjoy:

The first memory had to do with a schoolmate named something I don’t care to share. Anyway, he was distinctive in that he would lick his lips and the area around his lips obsessively. He had huge, cracking, oozing scabs all around his mouth. The teacher would smear Vaseline on the scabs, in the effort to teach him not to lick them, and as I recall it worked. After two years. We were classmates for about 4 years, and I still remember the sickly smell of his breath. That something I don’t care to share kid was weird!

The second memory is one of an interview. Sherri Stoner, who modeled Ariel in Disney’s The Little Mermaid, was talking about the movie. She revealed that the artists based a lot of the character on her to make Ariel more realistic. The trait they gave Ariel is her iconic nervous tic. She would bite her lower lip, in a cute, pouty way, that I can still see perfectly in my mind without the image below. Oh wait. It’s Disney. I can’t show you a picture of her. Copyrights and shit. Go Google “Ariel lip” and it’ll pop up.

These two things floated in my head for a while, until it occurred to wonder what it would look like if I bit the inside of my mouth. It turns out it looks very silly (see images). But, once it was in my brain, I couldn’t shake it. Yay for having OCD! I have chewed on the inside of my lips and cheeks for about 15 years now. I have prominent callouses, cuts, and bits of dead skin all over the inside rim of my mouth. Aren’t you glad you aren’t Jenny? Cause yeah, it can smell as bad as it sounds. Thankfully, I brush my teeth often, and use mouthwash, so it usually isn’t an issue. (Jenny edited to add: His breath smells fine. Truly.) 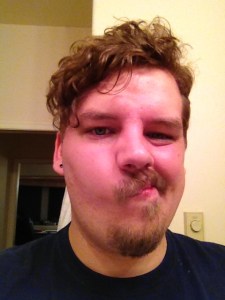 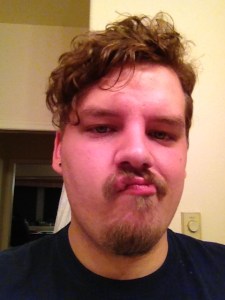 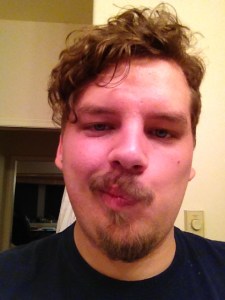 Got it. Now do it again!

Isn’t that hilarious?! Most people never say anything, and must think I make stupid faces at them for fun, or something. Well, I actually do, but that’s not what this is about, is it?

Anyway. Now I chew bubble gum a lot. It helps me take a break from destroying the inside of my mouth… as long as I’m still chewing. As soon as it comes out of my mouth, though, all bets are off. Sometimes, I still chew on my mouth while chewing gum. It makes for some interesting facial expressions. But the funny thing is, it hurt to do this when I was younger. It hasn’t hurt in at least 12 years. But, I still feel the “bitey” bit, as if I’m on a pain reliever. You know, like when you have morphine, but you can still feel your broken leg, it just doesn’t make you want to cry, cause you can’t feel the scary bit, only the “I’m broken” bit. I wonder if people who cut for a long time develop this dissociation.

Anyway, welcome to that part of my brain. Also, I went camping last night. This post is an elaborate hoax. No, really, I just wrote it in advance, and scheduled it, like a real blogger. I’m being awesome for your benefit. You are welcome.