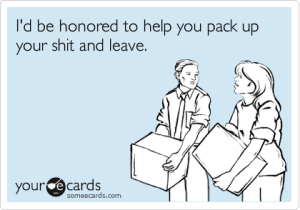 Classiest break up line ever.

I think it a hundred times a day. I obsess. When she talks to the kids, I stop what I’m doing and listen. Several times yesterday, I heard them talking about me and froze. “Is this it? Are they about to kick me out?” I just can’t get over this fear.

It’s completely irrational. My family loves me. They just can’t understand why I won’t eat cheese, which is what they were talking about at one point. I couldn’t resist yelling out (mostly out of relief), “I don’t like cheese because I was always too poor to buy the stuff, and never learned to eat it.” Awkward laughter ensued, as Jenny and the Girl realized that I could hear them talking about me.

While I was making dinner, the Girl went into the office to talk to her mom about “girl stuff.” I froze mid-mayo-spread. I listened until I was sure it was stuff I didn’t actually want to hear, and then resumed making as much noise as I could, in the futile effort to give them privacy.

It never stops. Every time Jenny walks out of the room while on the phone, my ears go on alert. I trust Jenny. I don’t do any of the crazy stuff I might have done in the past. I don’t check her email, or her phone apps. I don’t read her texts, or even really believe there’s any reason to. I’m just constantly paranoid that I’m going to forget to clean the toilet and find myself thrown ass over elbows into a ditch of thorns planted just for that purpose.

On a related note, Jenny called me out on a particular behavior. I alt+tab every time someone walks behind me. She thought I was trying to keep something from her, and was baffled as to what that might me. The truth is that I have been researching gift ideas, and I don’t want her to see that. But I do have that habit anyway. I don’t like people seeing what I’m doing in general. I’m pretty private. (Yes, I see the irony there.)

In the end, though, I guess Jenny and I are learning to rely on each other. It’s a good thing. I just hope she doesn’t check my Google search history. Trying to explain why I searched for “transvestite midget Christmas tree” would be a little awkward… especially because I don’t remember why I searched for those particular terms…

P.S. Don’t drink the Kool-Aid. Everyone I know is getting pregnant. Don’t be a victim of holiday pregnancy. Think of the children, or whatever. I have no idea what I’m saying. I’m going back to bed.