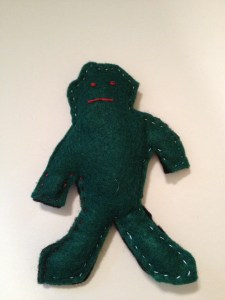 This is Fret. I am fretting today.

I might be diabetic. I have a range of symptoms that I’m not going to share here for now. Mostly because I don’t want you guys to post a bunch of comments telling me what other diseases I might have. I’m not a hypochondriac, but I am terrified of the possibility that I may be even more messed up than I thought.

I’m going to have my blood sugar tested in a couple of hours, and hopefully I will get positive results. Sadly, diabetes runs rampant in my family. Most of the adult relatives I have are diabetic. Both of my grandmothers were diabetic, and so are/were most of their children.

There’s no point in obsessing. So I am obsessing over not obsessing. It’s not working very well. I’ll let you guys know what’s up later, I guess. Fingers crossed that my symptoms are due to something boring, like necrotizing fasciitis. Flesh eating bacteria would be a relief. Mostly because then I don’t have to feel bad about eating ice cream and Oreo cookies.