There is this big fucking thing in my house. I know where it came from, and who put it there. It’s the monster from my closet, and I put it there.

It’s enormous, and covered in odd colored masses. It looks like Oscar the Grouch had a gay baby with Rainbow Brite, then planted the progeny, which grew into a colorful plant monstrosity. Yes, I know Rainbow Brite is supposedly a girl. No, I don’t agree. I just think that Rainbow was an 80’s fabu-queen with an obsessive compulsion to color coordinate his friends, and a fabulous outfit. 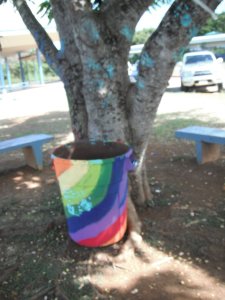 I know you’ve probably figured out what the monster is called. It’s called a Christmas tree, and it’s unnatural. Literally, it’s some kind of PVC and metal and shit.

I think it’s slightly obscene that we build this pagan shrine of color and build a pyre of sacrifices to the holiday gods. To top it off (hehe) we top it with symbols of the heavens. Angels, stars, whatever—this is the most backwards heathen practice I’ve ever seen.

And I’ll be damned for saying this: It’s fucking beautiful. My family gathered around this disgustingly green false entity and covered it in meaningful and glorious bits of ourselves. Get your head out of the gutter, I’m talking about ornaments. Pervert.

Listening to my new family talk about where they got each ornament, or who made it was like having the last couple decades brought to life for me. The kids have had the most amazing life. They each have their own boxes of ornaments, their own collections. We got out stockings, advent calendars, recipes, dishes, the works. Our house is full of history, unity, and nostalgia. It’s disgustingly beautiful.

It also fills me with a strange mixture of glee and anxiety. I’m excited to be included in this new world, but I’m worried I’ll fuck it up. I don’t have many positive associations with holidays. Between my crazy family, and complete state of poverty, we didn’t ever do much for holidays. Except the time my dad stole a huge novelty stocking full of toys, so we would have presents. That was awesome, because he gave me a Ken doll with an earring in, with a matching finger ring for me! Gayest thing ever, and my dad gave it to me! Of course, I found out it was stolen, and the idea that it was a thoughtful gift went out the window.

This year, I’m putting TONS of thought into every present. I want each gift I give to be precious, not something the other person feels compelled to keep, but an honest to goodness gift.

Back to the Christmas tree—I am in awe of its pride. It has taken over my living room, forcing a whole new arrangement of furniture, and it’s still standing there like, “Yeah, I’m bad.” What a dick.  Happy December. Eat some chocolate for me, okay? I have another 25 pounds to drop before the wedding next year. I’m taking it easy on, well, everything.

Enjoy the sight of my family’s Christmas tree: 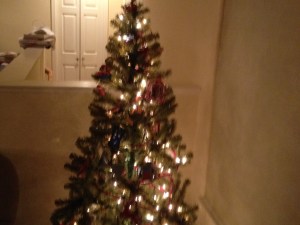 Awesome, but fucking terrifying. Someone save me.