The best part was seeing the people who deserved recognition getting it. One friend got a long overdue recognition from the King and Queen. Another got a scroll that he had never received when he got a recognition two years ago. I was glad to be a part of both recognitions. Here is a picture of me reading the scroll I made for the second friend: 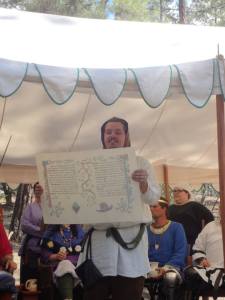 Then there was the walking back and forth. Not so great. The camp site is just over a quarter mile long from one end to the other. I walked back and forth a total of 37 times the first two days. Yes, I counted. That’s over nine miles in two days. I did not count on the last day, but I did walk an awful lot that day. I spent many hours talking and having fun, but I also spent a lot of time helping people. Tents had to be pitched, and things needed doing. I was there for everyone I could be there for. I did as much as I could, and I was rewarded for it.

The worst part of the event for me, was after everything was done for the day on Saturday. Around midnight, I just fell apart. I cried on peoples’ shoulders, and received many, many hugs. It says a lot about the community of the people I play with, that I was comforted all the way across camp, and all the way back to my tent. Jenny, throughout, held my hand, let me rant when I needed to talk, and supported me as I said goodnight to my friends.

I learn a little more about my limitations every day. This weekend, I learned, yet again, that I feel emotions on an extreme scale. Every time something went right, I was super super happy. Every time something went a little off, I was super frazzled. By midnight Saturday night, I was in tears. Thank you to the friends who made me feel better about the things I had no control over. I love you all. Carry on.