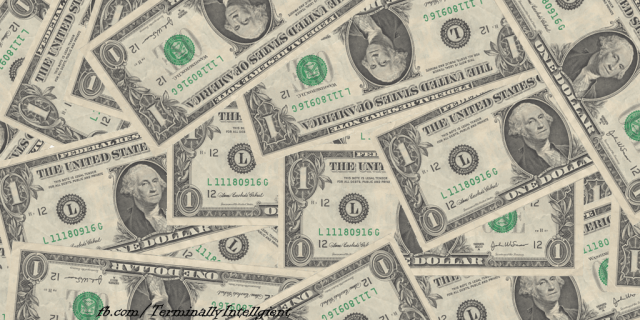 My mom did a lot of things wrong, but the one that make me sad most often is that she’d borrow money from us kids. Of course, she’d never pay it back. Kids with money is a waste when there are drugs to buy.

Now, not having money as a young person isn’t the end of the world. I didn’t have a need for money, per se. I’m not bemoaning being poor, or being broke even. It comes down to a matter of trust. For the first 15 years of my life, I trusted my mom, no matter what. It didn’t matter how many times she let me down. I just knew she was doing her best.

I can remember her “borrowing” money from me at pretty much every age. I never said no. I never hesitated. I loved my mom, and I wanted her to be happy. She asked to borrow money, and I gave it to her. That’s all there was to it.

Then our lives changed. Our lives changed a lot when we moved to Arkansas when I was 12. We couldn’t just go to Grandma’s, and we didn’t see our various aunts and uncles. We didn’t know our neighbors (which there were few of in the boonies). Getting money didn’t happen casually.

I worked for this rancher for a couple of weeks, to make some spending money for the Tontitown Grape Festival. It wasn’t a big deal, cleaning cow hoofs and mucking stalls. I earned like fifty bucks, which was great for a kid too young for a job.

My mom found out that I was sitting on this money a week before the Festival. She casually asked me if she could borrow it to pay the water bill. She’d pay it back on payday, and take me up to the Festival, too. I thought this was a great deal, and I made it.

Not only did she not pay me back, she made me call my friends, and tell them I couldn’t go because I was sick. She stole from me. She made me lie to my friends so their parents wouldn’t know what a bitch she had been. I was out $50, and I didn’t get to go to the Festival with my friends.

[Edit: I guess some of this wasn’t clear, so adding in some details hours later:

To this day, it makes me sad to pay the water bill. I love festivals, and I loathe “loans”.

My father, in his entire life, made good on a single IOU. He arranged for a friend of his to do a tattoo on my chest, rather than pay for it, which he’d promised to do. But I got the tattoo, and (thanks to the nature of tattoos) I’ll never forget it. But he failed on this subject many times, too.

Never borrow money from your kids. Let them exist outside your problems, don’t bring them in. No exceptions. Being an adult is your job. Let them buy some freaking LEGOs and be happy.