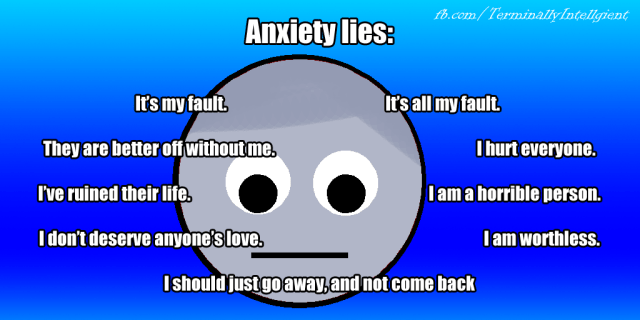 When I was a kid, I got a glass of water, drank it, and put the cup back in the cupboard. It just had water in it, and I was young enough to not know about germs and invisible ickies. My cousin, however, was quite old enough. He also had a severe case of Obsessive Compulsive Disorder. After he saw me do this, he was triggered into an episode of hyper-obsession. He washed his hands until they bled. He washed the dishes several times each before considering them “clean”.

I found out about this a few years later. I was paralyzed with guilt. Anxiety washed over me as I considered the turmoil I had resulted in my unknowing triggering of my cousin. It was my fault. This wouldn’t have happened if I didn’t do it to him.

I’ve seen a tragic number of folks, such as myself, feel like it’s their fault when someone else has a breakdown or episode. That’s just not how it works, folks. Mental illness starts on the inside, not the outside. If you do something that you interpret (or are told) as you being to blame for someone else’s episode, start with this checklist, and move forward from there.

If you didn’t answer “yes” to one, or more, of these parameters, you may not be to blame. Hurting someone on purpose isn’t okay. Making a mistake is. Things that don’t automatically make you guilty include:

Now, this isn’t a black and white. There’s a lot of modifiers in this discussion, I know. This is a sensitive and fluid topic. There’s not a right answer for every situation. The number one thing to keep in mind is this:

Mental illness comes from the inside. It is a personal struggle, not a failing on any party’s part.

Sometimes, there’s nothing you can do to keep someone else from triggering. Sometimes, your best efforts backfire. As far as my cousin was concerned, he had the sad burden of having OCD, without the benefit of medication and counseling. It wasn’t my action as an eight-year-old kid, it was an illness he already had.

Of course, my teenage self didn’t have anyone to tell him it wasn’t his fault. I thought that I was to blame for the entire thing, and I loathed myself. Now I know better. I’ve been able to let it go. My cousin got help, and he worked through it. I was a piece in a puzzle, not the artist that drew it. That’s okay. I’m okay.

If you feel like someone else’s episode is your fault, check yourself. Really, truly, look at the situation carefully. Apply logic and reason. Repeat if needed.

The same applies if someone else is blaming you for their difficulties. Sometimes, people just want someone else to blame for their problems. That’s never okay. Holding someone responsible for their own behavior is always appropriate, though. If all else fails, start a discussion with the person in question. You might be surprised at the ongoing conversation.

On the other hand, if you are the cause of someone else’s PTSD, keep your distance. Never assume that it’s “okay” because it might not ever be. If you want to try to maintain the relationship, let the other person take the lead, before you make things worse. Just saying.

If you still feel like it’s your fault, and you want to help, here are some things to try:

Love yourself. Be kind to yourself. Love and be kind to others. Everything’s going to be okay. Okay?