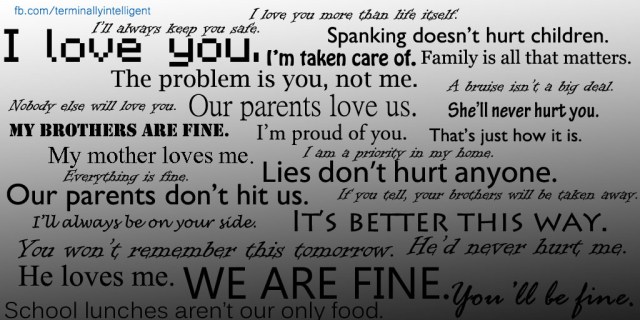 When I was a baby, I was surrounded by liars. My mother, in particular, was a master of saying anything but the truth. I absorbed this as part of learning how to talk, how to relate to others, and how to be a person. Add in some coaching from my parents, and I was put on a path to destroy my own life perpetually.

My twin was born with some physical health issues. He regularly stopped living for a little while, and had to be resuscitated. This started an anxiety deep in my mother’s heart. She was terrified that she’d lose her children because of Oak’s health problems.

Add abusive men, and her own violent habits, the chances of losing her children (to death or protective services) grew bigger every year. She started coaching us. How to behave, talk, and what to say, to keep people from suspecting something was wrong. I was taught to lie about everything, to everyone. She instilled a terror of losing my siblings so deep in my bones that I drank in her paranoia, and took everything she said as gospel truth.

Her lies became the foundation of the world I lived in. Telling people what they wanted to hear was better than being vulnerable. Lying is better than shame. Nothing is worse than losing the people you love. As time went on, there became more things to lie about.
One brother lost his hearing due to physical trauma. Turns out hitting your kids can hurt them. Our parents didn’t hit their kids.

Another brother fell behind in school, and was held back. Ignoring your kids’ education means that they won’t succeed. Our parents were dutiful. They didn’t just go to PTA stuff to give the appearance of involvement.

Yet another brother had a complete inability to communicate with anyone outside our home. He started kindergarten unable to talk to his classmates. He spent years learning to speak properly. I still remember our shortened names, and one-syllable sounds he used instead of our names. He called me “Ree”, unable to say my full name. Of course our parents did everything they could to educate him. They were dutiful, loving parents.

As her drug use became more serious, my mother became involved with progressively more abusive people. I had long learned the habit of protecting her from the consequences of her actions. I spent my entire middle, junior, and high school years protecting her from inquisitive school faculty. Lies. More and more lies, until all I had was this web of lies that kept everyone at a distance.

As a young adult, I began learning that other young adults are pretty good at spotting bullshit, especially the stuff that my brain would invent. I lost friend after friend, job after job, and partner after partner.

The summer before I turned 21, I had had enough. I lost my job, and out of options, I moved to Kansas to live with a guy I had hooked up with once. That was my first mistake in this situation. The second one was to decide to tell the truth.

There’s nothing wrong with the truth; in fact, it’s my favorite thing in the world, these days. My approach was the mistake. I told my boyfriend about it. I told him I was trying to tell the truth, and that I wasn’t very good at it yet. I told him I wanted to be able to open up to him, and asked him to be understanding if I made a few mistakes.

I was actually pretty good at telling the truth, it turns out. I opened up to him about my past, my childhood, and the rampant abuse. I didn’t realize something was wrong until the day I shared with him that one of my brothers was kidnapped when we were young. His father had broken out of prison, grabbed my brother, and wasn’t stopped until he was hundreds of miles away.

My boyfriend didn’t believe me. I don’t blame him now. I was a wreck at the time. We’d been watching the news regarding the Caylee Anthony case, and I had some intense flashbacks. I wasn’t my best at describing what I was going through, and he obviously thought I was lying, if not insane.

Fast-forward a bit, and I was homeless and spending a lot of time with Oak. I was still doing well with /not/ telling lies, but there were still a bunch of them floating in our past. I made one of the hardest decisions in my life. I told him the truth. I told him more than I’ve told anyone other than Jenny. I admitted my shame, and owned my mistakes.

Every word coming out of my mouth hurt like a hot wire in the eye. Shame, terror, self-loathing, and all the voices of the Jailor were on deck to torment me. Then the most miraculous thing in my life happened. Oak said, “Okay. Thanks for telling me.” His boyfriend didn’t say much, but I felt love and support surround me like a warm blanket in an Arkansan winter storm.

With their support, I was able to change my life in ways I never thought possible. I wasn’t perfect, and I learned the hard way that I didn’t know everything I needed to know about my past. A lifetime of lying to myself as well as everyone else left me unable to distinguish some of my memories from some of the lies.

It took a lot of work to sort things out. Oak’s understanding and encouragement helped me a lot. So did Facebook, oddly enough. With Oak and the Internet, I had the ability to fact-check myself. It took years, but now I’m confident in my memories again. I still don’t remember huge chunks of my childhood, and even some of my young adulthood.

Those memories are gone, but so are the lies that were tied in there so tightly. Now I also have the attentive love and encouragement of my wife. If something sounds off, she brings it in, and we talk it out. Every once in a while, I hit someone up on Facebook, and ask them to tell me about the situation I’m remembering. It has made all the difference in the world.

Now I rely on a meticulously managed structure of blunt honesty and a knowledge that I truly don’t care if the truth hurts someone’s feelings. It’s more important to me to be truthful than to babysit someone else’s feelings.