Sometimes I try to explain what it means to have PTSD. This is rare. It is very difficult to talk about, but I’ve had a stroke of insight into myself, and thought I’d share.

Think about your dreams. Sometimes we dream about the people we love doing something terrible. Someone once woke up and immediately told me “I’m mad at you for something you did in my dream.”  Of course, after a few minutes, that person was fine. They just needed time to remember that it wasn’t real, and to process her emotions out to match the reality.

Now imagine you have those dreams while you are awake. While you are talking to someone. A friend reaches out to take a piece of lint off of your shirt. Not only do you “see” them hitting you, you FEEL it. Not just getting hit, but the shame, the guilt of deserving to be hit, because it’s happened before. Your friend stops being your friend, and becomes your abusive parent. You don’t have the rational response of curiosity for what is on your shirt. Instead you get the gut-wrenching feeling of being in physical pain, caused by someone you are terrified of. And at the SAME TIME you have to watch your friend casually take a piece of lint off of your shirt, and NOT punch them, or scream in terror. 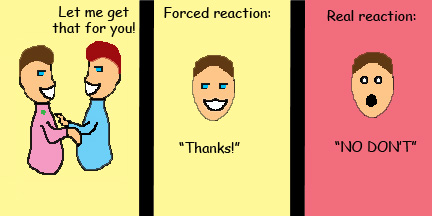 I can’t tell you how many times I have stifled a scream because of some innocent action someone has taken. I couldn’t count the number of people I’ve warned to not jump out at me. I can tell you, however, that I have punched an employer before. She startled me, and I just punched her. Yep, “her.” I hit a woman because she jumped out at me. Thankfully, I had previously had that all important conversation with her, and she knew I didn’t mean to hit her.

I’ve learned to control my “startles” very well. I don’t hit people anymore, but I am nevertheless transported to the terrible world of pain and terror that is PTSD. Now I flinch, or gasp, or shake my hand rapidly, all in the effort to not react to what is going on around me.

Now, just so you know why this is so hard for me. I have what is sometimes called “Complex PTSD.” It’s a form of PTSD that is sometimes misdiagnosed because it’s not from just one event. It’s from a series of events, traumas, or abuses that leave their marks on the person. For me, it was a combination of physical, emotional, verbal, and sexual abuses lasting from an early age until I was 17. I spent two thirds of my life in the toxic environment that was my mother’s care. I then moved on to form the most broken series of relationships I can imagine, lasting most of my adult life. My relationship with Jenny is the only one I can even begin to call healthy.

So the next time I breathe strangely for no reason, or shake my hand in a weird looking way, just know that I’ve seen you do something horrific, and please, please don’t ask what it was. Just give me space, and time to think. The best thing anyone can do is react appropriately to how I react. If I keep talking, and interacting, please just keep the conversation going, and if I leave, let me leave! It’s easy right?