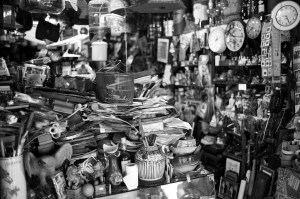 One of the things I experience around Jenny is a constant culture shock. We are so different sometimes, that I think we must be from different planets. Most of this is due to my very abusive and neglectful upbringing, compared to her mostly normal upbringing. Some of it has to do with her being a woman, but that bit is very small. An interestingly large portion of it is material, though.

In my world, you don’t get used to possessions. They get destroyed by siblings, or parents. They were often taken away, and given to other siblings, no matter how much I still enjoyed them, just so my parents didn’t have to buy them new things. Of course, since I was “older” I didn’t get new toys, because I was “obviously outgrowing them.” Which was horseshit, but whatever. I also moved. All. The. Time. I have vivid memories of my mother rummaging through our things, picking out a few outfits for each of us to wear, and throwing everything else in the trash. I remember once, when everything I owned was put in the trash, except for what I snuck into the car.

I collected Pokemon and Magic: The Gathering cards when I was a teenager. I came home once to my step-dad picking his teeth with a $400 card. I never told him how much it was worth, because he’d have sold it, but he wanted a toothpick, and my binder was there, so, that’s what he used. Never mind that there were toothpicks in the kitchen. My mom would also go through my things periodically, and sell anything valuable. I started storing things under the house while I was at school, so she couldn’t sell them.

When I was older, I was constantly shuffled from house to house, and even lived homeless for a while. I didn’t have the luxury of keeping my possessions, because I couldn’t haul them all with me. When I left my ex-husband, I took very little, because I couldn’t afford to ship much.

I’ve never hoarded anything. When Jenny and I met, I was wearing two year old boots, and they were my only shoes. When I moved in with her, I had two pairs of pants, two pajama bottoms, and about 10 shirts. Oh, and enough socks and underwear for about 5-6 days. I fit almost all of my possessions in a duffel bag, and Jenny was pretty shocked.

In contrast, Jenny and the kids have so many possessions that they don’t know what to do with them. [Jenny edited to add: Stuff just accumulates. It’s not like I buy stuff all the time.] So, this spring, I started us all on a journey that has lasted 6 months so far, and will probably continue for another 6. We are evaluating what needs to be kept, and what is being kept only because it’s emotionally significant.

We started with the kids. We moved them out of the only real bedroom in the house, and we moved in there. We moved the Girl into the second office, and now she has her own room. We moved the Boy into the suite apartment space downstairs that Jenny and I shared when I first moved in. We then built him walls, so he will have privacy. Now everyone has their own space. I thought the battle was mostly over.

Then I discovered the cupboard under the stairs. Or, should I say, the Black Hole of Death filled with literal centuries of accumulated stuff. You see, Jenny is the caretaker of all the family history stuff. A pair of old typewriters, a 100 year old pair of glasses, a few hundred pounds of paperwork, including birth certificates, death certificates, diplomas, birth announcements, correspondence, photographs, clothing, you name it. It was a bit overwhelming.

We put all that off over the summer while we went through the kids’ things. We set some parameters for what they would keep. All the fast-food toys went in the trash. We set up storage units from IKEA for them to use to organize their toys. They could fill those units up, but after they ran out of space, they couldn’t keep more toys. I encouraged them to keep things that they still played with, and suggested donating things that were still useful that they didn’t play with. We made some serious headway after that.

In the end, they each kept enough toys to make them feel like they still had their own things, but not so many that the toys just lay all over the floor. Then we did something similar with their clothes. This was mostly getting rid of things that didn’t fit too well. This was hard for both of the kids, as they had pajamas, and any number of other clothes that they had been wearing for years and were attached to. But we got through it.

It was during this process that Jenny and I realized that I had a completely different way of looking at possessions. I am now in a family where people keep things because they like them. Once I realized this, I vetoed some of the things the kids were giving away. I liked some of it. Some of the toys they didn’t want included things they had been given, but weren’t their favorites. A few of those had never even been played with. I adopted brand new Woody and Jessie dolls, from a Disney trip they took years ago.

Yesterday, Jenny and I tackled the Black Hole of Death. We went through over forty boxes. I asked some hard questions. I asked her when she last used each thing, and when she next expected to use it again. With some of the things, like toys that the kids had as babies, I suggested new homes. With other things, I asked her why she was keeping them. The questions helped give her a metric to measure her needs. We made a lot happen.

In the end, we cleared out nearly twenty boxes. Some of it is being donated to local charities, and a big chunk of stuff went to her ex-husband. Turns out, they had things packed in there from several years ago that they never unpacked when they moved into this house. It was nice to reunite those things with their proper owner. Several boxes of things went to friends and family. Two of these things were really satisfying. We were able to send a very nice Playmobil castle set off to live with our niece and nephew, and our friend’s daughter inherited a box of wood bits to practice her woodworking.

There are about 8 boxes that have to be carefully gone through, because it’s hard to throw away some things, because they mean so much to Jenny. There were another dozen boxes we didn’t go through, that were things like large art, and other wall hangings. Those are for another day. We also have a half dozen boxes of old tax/bill/finance records that need to be purged. Then we have to purge some items that have been un-homed by all of this.

This feeling of stability has allowed me to try a few new projects as well. Jenny and I have started learning German. (Aber, ich verstehe nur ein bisschen Deutsch!) I’ve also started collecting some things that are mine, and only mine. I’ve defined some space around the house that is for me to share in as well. I no longer feel guilty for leaving my XBOX plugged in, and I have my own space in the closet. I’ve also got a routine! It’s so awesome!

Anyway, I’m grateful that I have my family. I’m grateful they feel they can trust my judgement to help them make important decisions about their lives. I’m glad they want me to feel included. I’m learning what it’s like to have a family, and it’s fucking amazing.

What are you grateful for this week? Let me know! Carry on, dear reader, with my love.