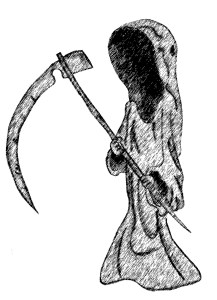 You would think, with a name like Terminally Intelligent, that I would talk about death more. Well, I try my damnedest not to. It’s depressing, and hard for people to hear about. Not to mention the triggers that death can bring up for some people. On that note: Trigger Warning!

I have an acquaintance who is dying. Those who know him already know, so I’m not really spilling the beans on that. I’m here to tell you something else. Those of you who don’t like what I have to say here can EAT SHIT. I really mean it. I’ve already been passive-aggressively told that I’m “not doing enough” by two people, and it’s HORSE SHIT. I know some of you will judge me harshly, and I couldn’t care less. If you still feel the need to judge me after reading this post, then tell me so, and don’t be surprised if I never talk to you again. I don’t need to know someone as ignorant as you anyway.

This man, we will call him Luke, is an inspiration. He has been a friend to me for two years now. He is always willing to help people, and has given me help many times. I have taken time out to talk to him every chance I get, and I’ve taken the opportunity to help him more than once, usually in small, but significant ways. Luke means a lot to me. He was my first fencing teacher, and my first friend in the SCA. But right now, he is dying. He has cancer, and it’s very advanced. I know he won’t live very long. It’s killing him, but I feel like it’s killing me as well.

Here’s the rub. He’s not always been popular. He’s awkward, and shy. He doesn’t respond well to social cues. People have maligned him through ignorance and inconsideration as long as I’ve known him. People who have never shown more than cursory friendliness are pouring out to show him solidarity now. And some of them are parading it around like they’ve won a fucking prize. I may not have been the best friend to him, but I’ve been grateful for his role in my life, and I made sure he knew it. I hope I mean half as much to him as he means to me.

But I can’t visit him. I just can’t. It makes me physically ill to think about him, and I’ve already thrown up twice out of guilt. He is a great man, with few friends. And he is dying a slow, painful, lonely death. There’s nothing I can do about that. Every time I try to work up the energy to visit, I have a panic attack. I’ve not even been able to ask Jenny about it.

Someone once told me about the “dumping circles” rule. Every illness is a series of concentric circles. In the center circle is the sick person. Next circle out is that person’s spouse and underage children. Next circle is their adult children/parents. Next circle is extended family, and close friends. Everyone else is outside of the circles. Even close-ish friends. If you don’t consider this person among your 5 closest friends, you don’t get into a circle. Therefore, I am not in a circle.

The rule is that you never “dump in.” You never say “that’s awful!” or “I don’t know if I can take this” to someone in a circle smaller than yours. Anyone can dump out. Nobody ever gets to dump in. You only show support and love to the sick person and anyone in a smaller circle than you. The sick person is allowed to wallow, and be dramatic. Their job here sucks. But the people who are currently guilting other people? They aren’t in a circle. They think they are, but they aren’t. And people outside the circles get to keep their mouths shut.

I feel guilty, because I’m not being there for someone who needs me. I feel like I’m being judged by our mutual acquaintances, and I probably will be after this post. I know I’m not doing enough, but I can’t do more. If I went to his house, I’d throw up on the rug, cry so much it hurt him to watch, and leave. That’s called dumping in. It’s too much, and I’m too weak. At least two people have said “If I can do it, you can do it.” That’s complete crap, and that’s all there is to it.

I have a rule, and I hope it has shown itself through my blog over time: NEVER compare your experience to someone else’s. Your feelings are valid. Period. It doesn’t matter if someone has it better or worse than you. It doesn’t matter if you think you are in the most pain anyone has ever suffered. Your experience is your own, and how other people react to the world should not be measured on your scale. EVER!

If I judged people by my metric, I would laugh in the faces of most people’s pain. I would be a terrible, hateful, snide son-of-a-bitch. Say someone has a minor anxiety issue, let’s say, concerning cats. They are afraid of cats, and sometimes have panic attacks around cats. I would look at that person’s anxiety, and laugh them out of the room for complaining. I have a friend (Let’s say, Bill?) who has PTSD because of an isolated domestic abuse incident. If I were so crude as to put him on a scale comparing him to my PTSD, he would register, but not very highly. The only people I personally know who register highly are: A combat veteran who lost a leg, and a hand in Iraq, after dragging his friend out of enemy fire, only to realize that friend was dead, and my brothers, who also went through some of the most insane fucking bullshit any human being can survive.

It just doesn’t work. Everyone has their own experience, and their experience is just as valid as anyone else’s. I mean it when I say this. My friend Bill’s PTSD flashbacks, and inappropriate reactions to physical contact rule his intimate life, and limit his ability to have friends. His PTSD is no less real than mine.

My point is this: Something may be hard for you, and that sucks. But it doesn’t make it less hard for someone else. Think before you guilt people over what they aren’t doing. I’m one of the few people who have the rare-as-fuck ability to put this shit on display for everyone to read. I can’t be the only one who can’t visit Luke because of my inability to cope. I’m just the only one who doesn’t care if you hate me for admitting it.

Questions? Comments? Share below, I really want to know. Carry on, dear reader, and remember Luke. I know I will.