This is a guest post written by Joshua Rivedal. Read to the end for details on his projects. 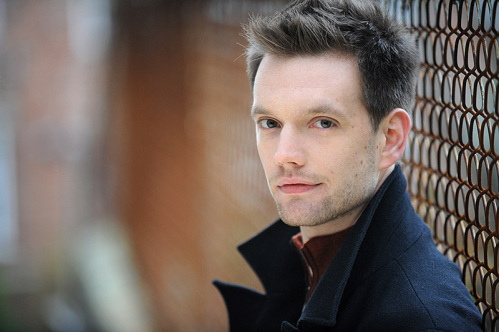 Captain’s log, Stardate January 2011. Where unfortunately many have gone before. I’m twenty-six years old and thinking about dying… actually I’m not being entirely truthful. I’m dangling halfway out the fourth floor window of my bedroom in New York City.

I don’t really want to die. I just want the emotional pain to stop… and I don’t know how to do that. Hell, two guys in my life—my father and grandfather—each didn’t know how to make their own terrible personal pain stop and now both were, well, dead.

My grandfather, Haakon—a Norwegian guy who served in the Royal Air Force (35th Squadron as a tail gunner) in World War II—killed himself in 1966 because of the overwhelming post traumatic stress he suffered because of the war.

My father, Douglas—an American guy who was chronically unhappy and an abusive man—killed himself in 2009, the catalyst being a divorce with my mother along with some long-term depression and other mental health issues.

How did I get to such a dismal place in my life so quickly, just a month shy of my twenty-seventh birthday? Coming out of secondary school and high on optimism, I thought by the time I reached my mid-twenties I’d have it all together. After a couple of years singing on Broadway, I would have scored a few bit parts on Law & Order, and transitioned seamlessly to being cast with Will Smith in the summer’s biggest blockbuster. After which, my getaway home in the Hamptons would be featured in Better Homes & Gardens, and my face would grace the cover of National Enquirer as Bigfoot’s not-so-secret lover. Not to mention, I’d have my perfect wife and perfect family by my side to share in my success.

But instead, “perfect” was unattainable (it always is). I only managed to perform in some of small professional theatre gigs and on one embarrassing reality television show; and over the course of the previous eighteen months my father killed himself, my mother betrayed me and sued me for my father’s inheritance, and my girlfriend of six years broke up with me.

This storm of calamity and crisis had ravaged my life… and I wasn’t talking about it to anyone. My silence led to crisis and poor decisions—to the extent that I was hanging out of a fourth story window.

Both Haakon and Douglas suffered their pain in silence because of the stigma surrounding talking about mental illness and getting help. I too felt that same stigma—like I’d be seen as “crazy” or “less of a man” if I talked about what I was going through. But I didn’t want to die and so I had to take a chance.

I started talking. I pulled myself back inside and first called my mom. She helped me through that initial crisis and we became friends again. She never called me “crazy.” I then started reaching out to the positive friends I had in my life. They hugged me and helped me with open arms. They never told me I was “less than a man.” Soon I got more help by seeing a professional counselor, and by writing down what I was going through in a journal.

But this idea of keeping silent continued to bother me. I did some research while in my recovery and found out that each year, suicide kills over one million people worldwide… and that many of those one million never speak up about their emotional pain because of stigma.

Dagnabbit (I totally just said that). I had to figure out a way to reach people like that. So, like any other actor, writer, or comedian living in New York City whose life dealt them a crappy hand, I created a one-man show… and it toured theatres and universities in the United States, Canada, England, and Australia—and people were getting help.

But I had to keep talking because this isn’t just a Rivedal problem or United States problem… it’s a world problem.

I had to get other people to tell their stories, so I started The i’Mpossible Project. Why? Because storytelling is one of our oldest traditions—yes, even older than the hokey pokey. Stories can make us laugh or cry… or both at the same time. They can teach, inspire and even ignite an entire movement.

The stories of The i’Mpossible Project are about overcoming obstacles, reengaging with life, and creating new possibilities—a son’s homicide, a transgender man finding love, and even coming back from the brink of suicide (you can read a couple of the stories HERE)… because it’s okay to be struggling, it’s okay to need help; people have your back… there’s hope.

It’s been four years since my crisis and life is definitely looking up. The acting and writing thing is going well, I have a great girlfriend; but most important I’m able to give and receive help and love, and with hard work I’m able to stay mentally well—all because I took a risk and told my story.

No matter what society says, it’s COOL (as in “okay”) to talk about your feelings. Don’t ever forget that you are important, and your story needs to be heard so we, the human race, can learn how to live and love better. #iampossible #mentalhealth

Josh Rivedal (founder, executive director of The i’Mpossible Project) is an author, actor, playwright, and international public speaker on suicide prevention, mental health, and diversity. He curated the 50-story inspirational anthology The i’Mpossible Project: Reengaging With Life Creating a New You. He wrote and developed the one-man play, Kicking My Blue Genes in The Butt (KMBB), which has toured extensively throughout the U.S., Canada, and the U.K. He writes for the Huffington Post. His memoir The Gospel According to Josh: A 28-Year Gentile Bar Mitzvah, based on KMBB and published by Skookum Hill in 2013, is on The American Foundation for Suicide Prevention’s recommended reading list.