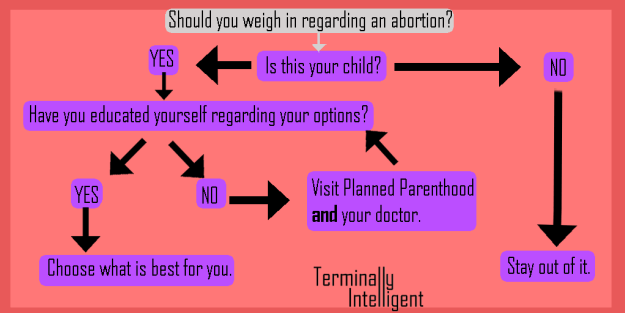 The battlefields are populated. The lines are drawn in the sand, and nation-wide, politicians, churches, citizens, and healthcare professionals are all trying to win a battle they see with an “Us vs. Them” mentality. But could there be middle ground where both anti-abortion and private rights come together? The short answer is yes.

The long answer is that it’s not possible to get everyone on the same level on this one. The arguments behind anti-abortion and individual rights are strong ones, each with their own moral and legal compasses. Thankfully, there is a way to reconcile both positions: education.

The position of “pro-life” is often cushioned in a bubble insisting that abortion is murder. In this position, it is entirely justifiable to prevent the rights of the mother in order to protect the rights of the child. I understand and agree, to an extent.

The position of “pro-choice” is a matter of human rights for the mother. What it comes down to is her right to decide what happens to her body, and her right to live her life in the freedom of personal decision as enforced in American law. Again, I understand this position 100%, and I do see situations that call for abortion, so we’ll go into the caveats of both positions now.

The first thing, in my opinion, is that the decision to have an abortion or to carry a child to term is a choice that cannot be made by anyone except the parents of that child. This isn’t a matter of morals, it’s a matter of personal rights. Because of Roe v. Wade, the legal precedent is to uphold the private rights of the individuals in these situations. That precedent has been upheld for over 40 years. The legislative branch isn’t going to be able to do much more at this point.

Second, I believe that choosing to have an abortion should be done with the greatest care for the health of the mother first, child second. This falls back to an article I wrote recently regarding helping yourself first, so that you can help others later. Abortion shouldn’t be a choice. It shouldn’t be necessary. But this isn’t a topic for “should”, is it? There are too many factors, too many morals and laws for it to be a clear choice.

Now for the best part: bringing them together. It is a simple process (though one hard to swallow) to reduce the number of abortions. Only two things have to be prioritized: education and healthcare. With a thorough education regarding physical health, reproduction, responsible sexual behavior, and prevention of pregnancy, the need for abortions would plummet, because there would be drastically fewer unwanted pregnancies. If basic healthcare was available to poor communities, continuous education would become more of the norm.

Now, I’ve done some serious soul-searching on this topic over the years, and there are a few things that always come back to me. Primarily, it’s my job as a human being to support other humans in education and prevention. It is also my job to let people make their own choices. I don’t want someone telling me I can’t have a vasectomy, and I owe the courtesy of personal rights to other citizens, even if I don’t like their decisions.

I want the deaths of fetuses to end, and I want the parents to make that choice, not me. If we provide education, access to appropriate prevention and healthcare, and stop trying to bully people into agreeing with us, abortions would decrease dramatically. The only responsible choice here is to educate, not legislate.

Let’s all move away from punishing the uneducated and poor, and instead promote their education. That’s the only way to be pro-life and pro-choice as I see it.

P.S. Surrendering children to foster services is a terrible way to encourage pro-life mentality. If we take the money from Planned Parenthood and force mothers to bear their child to term, just to place that child in a broken system for its “protection”, we are just bashing our heads into the wall of this just doesn’t work. Rant over.