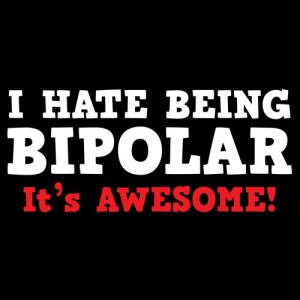 This weekend, I did a lot of cool stuff. I made bread. I hung out with people I don’t see often. I generally did stuff. I also said a lot of things, and made promises.

Monday night, I came to the realization that I had been manic. Sometimes, it sneaks up on you!

The problem here is that I have to question everything I said over the weekend. For example, I had to question whether I was going to make fresh bread every week. While manic I was like, “Every week from now on. Forever.” After my crash, I had to look at the huge bag of flour we bought at a warehouse store, and decide whether I am actually going to be making homemade bread for the rest of my adult life.

Answer: HELL YES. Oh, my God, homemade bread is amazing. Also, it’s healthier. It’s like mana from Heaven, but with all the carbs of real food!

I’m glad I still want to make the bread. But it could easily have been the opposite. Jenny would have killed me, but that wouldn’t have changed my mind on whether I will spend 6 hours every weekend making bread. I’ve changed my mind on so many things, I’m amazed Jenny still lets me make decisions.

Also, neither of us trusts me to manage money because all the planning in the world goes right out the window when I have-to-have-a-soda-right-now. How much worse can it get, right? Wrong. I have spent thousands of dollars of student loans on stupid shit. Once, I bought an XBOX, a PS3, a Wii, two new computers, with 27 inch HD TV monitors.

I had a thousand justifications for it at the time, but what it came down to is this: I live in two worlds. I have normal life, and then I have a world that has different physics, laws, thrills, consequences, etc. It never ends.

I like some people more when I’m not medicated. Those people usually include assholes. Those times are also when I’m most likely to be an asshole. I don’t love people enough, and I treat good people like crap. I have made it my goal for the last year to not burn any bridges while upset. It allows me to not regret when I let a friendship lapse. Either I don’t want it to continue, or even better, when I do want to reinvest in a relationship, there are no hard feelings. I just say, “sorry we haven’t talked in a while, I’ve been bonkers,” and we move on with our days, happy to have talked to each other.

One day, I will think I have it trumped. And that will be the worst symptom of all, because I’ll want to go off of my meds. I pray that day only comes when I have Jenny to kick my ass. I will need it. There are two things I know will be true for the rest of my life; I will love Jenny until I die, and I will always need medication.

Until next time. Don’t let your mental illness lie to you, and don’t let it make you a liar. Think before you follow your compulsions, and love everyone all the time.