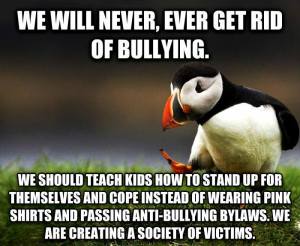 Meme from the interwebs.

This. In a world where all the players are giving “participation” trophies, and kids are expelled from school for saying a single word that is labelled a “hate crime” or “terroristic threatening,” it’s more important to teach the young people of today that tolerance comes in many forms. Including standing up for those being oppressed or discriminated against, but also including accepting that some people are going to make mistakes. There’s also the need to teach kids to shrug that shit off. They are being made fun of for who they are, and that shouldn’t make them feel bad. They should just say, “okay” and move on with their day. People should stand up for themselves, not depend on “the system” to eradicate the bullies.

We are creating a system in which our children will grow up not being able to deal with stress, or overbearing coworkers. When a coworker is a dick, nobody fires him for being a dick. Usually, that’s the guy that gets promoted, because he gets shit done! That’s management material, folks. The guy that’s all “we should all get along” gets to stay right where he is, because his bosses know he won’t be a good manager, because he emotionally invests into his coworkers, rather than prioritizing the work that needs to be done.

When these kids get into college, and they have to compete with the entire class because they are graded on a curve, nobody is going to give them grade for “trying.” In fact, “trying” gets you failed. “Succeeding” gets you the grade.

According to Drexel University’s Self Esteem Guide people need to accept ALL of themselves, including their faults. They also need to stand up for themselves to understand themselves better.

Growing up, I was bullied for a lot of things. Most of the time it didn’t bother me. I was only ever bothered when someone was picking on my family. ‘Cause you stand up for those bastards, even if you hate their guts sometimes. When kids would call me names, I would simply leave the area. When I got “pantsed” I turned around, grabbed my dick, and told the guy that if he wanted my dick, all he had to do was ask. I got really good at reverse-bullying. If someone bullied me, and I couldn’t just ignore it, or walk away, I made them feel inferior for behaving the way they did. It ALWAYS worked. I was never bullied by the same kid twice after about the 6th grade. A BIG part of this was accepting that I can’t completely change who I am.

I also practiced being a dick on demand. This was a nice bubble for me. If someone makes me uncomfortable, I can easily make them more so. I have very little shame because of the bullying I experienced when I was younger. Most people are easy enough to figure out, so I go for their hot button, and they never pull that shit again.

The funny thing is this. No matter how many times I turn on my “jerk” charm, most people still think I’m sweet, and kind-hearted. BECAUSE I AM. I just refuse to take shit from anyone, except Jenny. Because she’s usually right, which makes it NOT-SHIT, but that’s different, anyway.

Teach your kids to stand up for themselves. Teach them how to defend themselves, not just with their fists, but with their wits. I mess with my kids just enough that I never make them feel bad, but I also challenge the way they see themselves, and encourage them to accept who they are. I also try to teach them how to recognize when someone else is saying something that doesn’t matter, or is just hot air.

This is great for the Girl, because she can take things personally a little too easily. The Boy, however, will tear your mocking to shreds because you used the wrong pejorative. I don’t doubt that they will both deal with bullying when they are older, but I know they will come through it stronger, because they weren’t rescued by someone else.

Finally, if you think your kids is a bully, get them help. Do your research, and reach out. Sometimes, the bully is the least secure person you know. They need to learn the right thing to do as well.