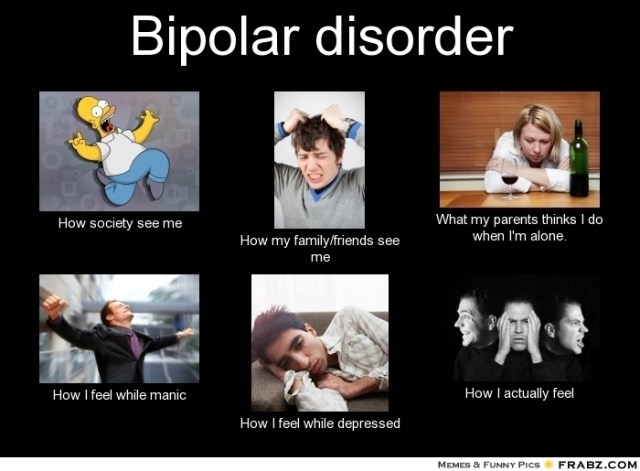 Nabbed from Facebook, land of stolen intellectual property. If this belongs to you, and you want me to take it down for some crazy reason, just say so.

So, I’ve probably said it before, but I hate that this is “accurate” to the uneducated. Hell, even to the educated, sometimes.

The thing is, there is only one bit to this whole thing that is accurate. The “How I actually feel” is pretty dead on.

If I had the patience, I’d make a new one, but I don’t even have MS Paint, since I’m still playing on my daughter’s iMac, while I wait for my new computer to be finished.

This may sound like a boring ass meme, but the thing is, when we perpetuate the kind of memes like the one pictured, we are just continuing the cycle of stigma. We have to take it under our own control, and make ourselves be seen as people, not as an illness.

I do this by telling everyone I know that I am bipolar, and have PTSD. People sometimes avoid me afterwards, for a little while, but I meet most people through preexisting groups, so they can’t usually completely avoid me. They eventually see that I’m not going to throw things, or scream at people. They come to see me as a person. Many of my friends have to think about it to remember what mental illnesses I have, even though I know they all know. Many of them read this blog, and it’s easier for them, but even they don’t think of me as “bipolar” or “crazy”. At worst, they see me as “having bipolar disorder/PTSD.”

Now, I want you to know, I still face stigma. There are still people who refuse to be my friend, because they’ve had problems with unmedicated people with bipolar disorder. They judge me prematurely, and never give me a second chance. Wanna know what I think of those people? I think it’s very sad that they don’t understand, and don’t want to. I don’t hate them, or pity them, or judge them. I don’t write them off. I just keep trying, and hope for the best.

I’m not going to tell you how to make this decision for yourself. I will tell you all, that if you know someone who has mental health issues, don’t think they are being flaky just because they don’t present as a crazy person all the time. Remember that they are fighting for control of themselves all the time. And if they don’t come off as crazy, then they are succeeding, if only just a little.

Be considerate, be kind.