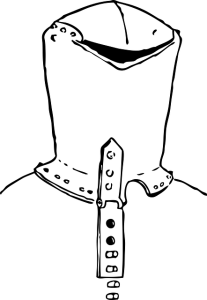 Sometimes, all it takes is one little hit to the head to screw up your whole day. I know some of you know bits and pieces of this story, and some of you think you know more than you really do. Some of you have no idea this was a thing. I’m writing about it now, so that I can leave it where it belongs: in my memories, and in my past. I don’t want it to be the focus of this blog, but it’s a part of me, so it will be a part of this collection as well.

In late 2011, I went out with some members of the local SCA. If you don’t know about these guys check them out, but suffice to say, this day we were knocking the crap out of each other with heavy pieces of padded wood. Of course, this was training, and I was new, so they were taking it easy on me. We also had loaner gear on, including plastic armor and old loaner helmets. I wasn’t the only new kid though, and to make sure we both had some fun, they let us practice with each other a little bit. Let’s call this other new guy “Gary”. Well, here’s the thing. I’m not a small guy, but Gary had at least 3-4 inches on me, and probably an extra 20-30 pounds as well.  And, while I was there to meet some fellow weirdoes, Gary was there to try another fighting style.  It wasn’t long before he whopped me over the head, and good. I sat down for a while, until finally I realized that I wasn’t going to be able to try again, and returned the protective equipment I had been lent. I never saw Gary around again.

My roommate picked me up, and we went to a friend’s house. This friend just happened to be a nurse. This is the part where it gets particularly fuzzy for me. I don’t remember if she thought I had a concussion, but I do remember not going to the hospital. I also remember a killer cup of coffee… a strong, home roasted blend. I don’t remember going home, or looking for the gun, but I remember finding myself in the kitchen, with my hand on a knife, ready to kill myself. I remember running into my roommates room crying. I remember telling him I didn’t feel like it was safe for me to be alone, and that I needed to go to the hospital.

It turns out; I wouldn’t be alive if it weren’t for my roommate at that time. He had hidden the gun, because he thought I was acting funny. He called our nurse friend, and got suggestions as to where would be the best place to go. He took me to the local hospital with the best reputation for psychiatric care. And he checked on me constantly while I was admitted to a facility.

The list of minor calamities that lead to my suicide attempt includes:

1)      Not knowing about the interactions between my medication and other medications. Specifically, I didn’t know that Aspirin de-activated my Depakote.

2)      Not taking the proper amount of medication. I was seriously under medicated for a person my height and weight. At the psychiatric facility, they TRIPLED my dose as a tentative reach to be in the range of suggested daily allotments.

3)      High amounts of caffeine while basically un-medicated. For a bipolar person in a manic state, this can always lead to an extra excited state.

4)      A minor head injury. Not terrible in itself, but definitely a complicating factor.

The list of saving graces that mean I’m here to blog for you, my friends and readers includes:

1)      The awareness and forethought of my roommate. Having someone in your life who is able to keep you in their scopes is sometimes all you really need.

2)      The knowledge of my nurse friend, who was able to help me roommate get me to the proper hospital, and seek treatment. Sometimes half the battle is knowing where to go when you are sick. If a person has Cancer don’t they check out all the treatment centers? Why would someone not do the same for their mental illness?

3)      The knowledgeable staff, case workers, and physicians, both at the hospital, and the psychiatric facility.

4)      My friends and family who accepted me when I came back and didn’t treat me like a broken thing. They just treated me like I belonged.

I want you all to know that I didn’t try to commit suicide as an “attention seeking behavior”. I didn’t even make a conscious choice. I didn’t even know what was going on until I stopped myself.  But I was able to stop myself, and ask for help. That’s the important part. Please don’t ever mock or degrade something like someone’s mental illness, because then they might not be able to make themselves come to you when they need you most. I HATED myself for going into my roommate’s bedroom that night. I still do. But I am proud to have him as a friend, because he will always be there for me.

And, as always; do some research. You never know when you need to know.