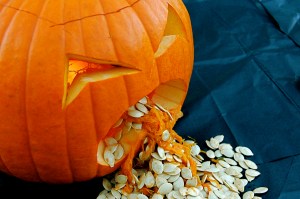 I fucking hate anxiety. It lies. It takes cheap blows. It makes life no fun. If you’ve read my last several posts, you know that I’ve been doing well with the anxiety and OCD lately. I knew it couldn’t last.

The other night we had friends over for our weekly game night. It was pretty awesome. Mostly. We cooked together in the kitchen, and had 7 people in my 50 square foot space. It was asses to elbows. It was great. Then I had one of my “silent” panic attacks. I started obsessing over everything, and convinced myself that I was going to burn the pie, eggs, hashbrowns, etc. I checked and re-checked everything. It didn’t help that I altered the recipe for the pie a LOT, and then the cook time was way longer than the original recipe. I didn’t burn anything, and everyone liked the pie.

After food was served, I ate very quickly, and we moved on to games while enjoying dessert. We played Trivial Pursuit, which I am terrible at. In the first turn, I got two pieces of pie, which was awesome because I was eating pumpkin pie at the same time. I then proceeded to get everything else wrong after that. My anxiety increased, and my hands started sweating.

I kept saying stupid things out of distraction. When Gary Oldman came up, I asked, “Is that the short midget black actor?” Of course, it was the actor from Fifth Element that was being discussed, but Gary Coleman was who came to mind. After much laughter, we moved on, but my anxiety just kept climbing. Also on the list of odd humor: I didn’t know who Winona Ryder was, or who Harrison Ford was. I also had no idea who John Williams was, to the great disappointment of my friends.

This kind of thing comes up fairly often. I didn’t watch much TV growing up, and I have missed out on a lot in the world of media. But last night, it just fed my anxiety. My palms got sweatier and my heart rate increased. I drank 2 quarts of lemonade just to have something to do. Then we couldn’t find our daughters, and my anxiety increased again, because they had been playing outside in the dark. After 20 minutes of calling and texting them, we realized that they were in a room downstairs, and just didn’t have their phones with them.

Finally game night wrapped up. We walked our friends to their cars. On the way, I leaned over the rail and let a good bit of lemonade and pumpkin pie pour out of me into the bushes. I had hiccuped so hard I had vomited. I’m broken, and it’s stupid, but hiccups always fuck me up. Mixed with anxiety, it was a recipe for reverse lemon flavored pumpkin pie.

In retrospect, I shouldn’t have drunk so much lemonade. But it was delicious, and gave me something to do to keep from talking. Bad coping mechanism, noted.

I ended up staying awake until nearly 1 o’clock, and overslept yesterday. I woke with a knot in my stomach. It set the stage for a very hectic day, as I rushed around trying to get everything done for the day. I failed, but it was mostly okay. I made progress on stuff. Whatever.

I know I won’t ever be cured. I know I will never stop taking medication. I know it won’t always work. But I had gotten overly optimistic, and I got a shock of reality. I will have to remember to be more realistic with my goals in the future. But it’s still upsetting that I got THAT anxious. I mean, I friggin threw up! It’s been a long time since that’s happened. I guess meds can’t fix everything.