Recently I was contacted by Jonathan Looper, the writer and producer of the short film “My Only Son” and feature film “Light Wounds – the true story of a childhood friend and his battle during the onset of schizophrenia.” He has asked my to post the following article on his behalf, and I totally think it’s a great project, so I have agreed to. Huffington Post also wrote it up!

From “My Only Son”

“Over a year ago, I began working with a childhood friend and young Veteran to write a screenplay based on his experience during the onset of schizophrenia in his 20s. In January, his story came to life on film through a short film and now we are in pre-production of the feature film at www.lightwoundsmovie.com.  I talk a little about this experience in the promo video on the feature campaign page, but I believe he says it best.  This is from my friend, Dustin DeMoss, the person upon whom the films are based:

“I started my journey advocating for the mentally ill unbeknownst to myself at the time by sharing my story of illness and recovery with a dear friend from my childhood days, Jonathan Looper. I had been involved in politics at the time representing veterans for the Oklahoma Democratic Party and I knew Jonathan had worked in local politics in Oklahoma and for Hillary Clinton’s campaign in DC.  So I reached out to him to find out how to get more involved.  Jonathan was finishing his Masters in Film at the time and he believed in the power of my story and asked if we could develop my story into a film. The short film was produced under the title “My Only Son” and now we’re working on a feature film adaptation, titled “Light Wounds.” 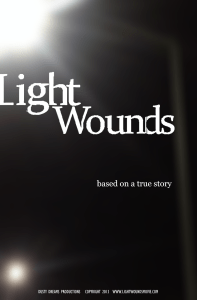 The start of this journey was a long experience with many ups and downs, mostly downs. The one part that concerns me to this day is I never had a tear hit my cheek from the difficulty of it. At times I wanted to give up and end it all unsure of where I’d be headed in a life with a major mental illness. I wanted to throw in the proverbial towel and say, “Lord, I’m sorry but I give up.” I gave up on God, I gave up on myself. I didn’t believe there was any worth in myself. There was nothing good that could come of this.

This feeling of no worth threw me into a 3 and a half-year long post-psychotic depression. It’s not something I’m proud of and I lost many friends, and still lose friends because they just don’t understand what I’ve been through but the difference is today I make no apologies for who I’ve become. If you can’t accept that I live with a major mental illness, then I can’t accept your judgment. No, I’m not shirking responsibility for my actions. Never have. I take my medicine, I stay updated with my exceptionally skillful VA mental health team and I make an effort to overcome my illness on a daily basis. No, I am not the most polite or charismatic individual, but I’m a damn good person and you’d be lucky to know me if you can get past that iffy stigma thing.

Yes, I’m sure I’ve been turned down jobs because I’m vocal about my illness but I’m not wrapped up in the illness either. I’ve had women reject me when I opened up about my illness, but that doesn’t bother me. I’m a success with or without you because I successfully live with this illness on a daily basis.

The short film we made about my life story validates what everyone struggling with a mental illness feels, and fights the stigma that so often people claim they don’t judge you based on but nonetheless it’s always in the back of their minds. I believe the short and feature films will impact so many people and heighten the awareness about mental illness, especially in a time when one needs to be sensitive to the effect it has in society and the world at large.  People are suffering and too often we’re finding out too late to rescue them.”

We’ve come a long way in a year and a half, but we still need your support to finish the journey with this feature film.  Visit www.lightwoundsmovie.com to view the video from Dustin, supporters of the film and the producers and please do what you can – whether that be donating, sharing with friends or family, or recording your own message about what this film means to you.”

The short film “My Only Son” has been publicly released on YouTube. I liked it, but I know it’s not for everyone. What did you think? Please comment below.