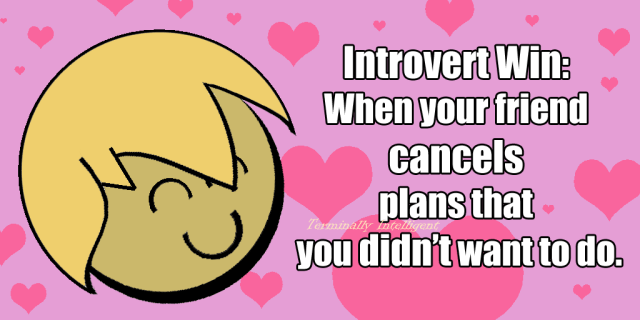 Sometimes I got out, and it’s the most amazing thing in the world. Other times, someone invites me over, and I say yes. Then the plan changes a little. Then it changes a little more. Somehow, agreeing to go to their house for quiet dinner becomes helping them host a party. Not a good way to feed an introvert’s soul. There’s no polite way out. All the introvert can do is suck it up, or try to leave gracefully. Generally, my idea of “graceful” in these situations makes things worse.

I’m pretty good at holding it all in until the party is going, and then I’m like, “bounce!” A few times, I’ve had friends accuse me of leaving early so I didn’t have to clean up. In those situations, all I could think was,

“Bitch, we were gonna have tea and tamales. Who the hell made you think I was gonna set your party up, host it for you while you talk to people, and then clean up your huge-ass house?”

Sometimes, I make the mistake of saying that shit out loud.

Now, this hasn’t happened in a while. Mostly because I just don’t leave the house. It works pretty well. Especially with a wife. I get to use the most accurate and welcome excuse possible. I get to say, “No thanks, I’m spending tonight with my family.” BOOM. But when I do go out, I am careful about what I agree to. And then I speak up clearly as soon as it becomes shit I don’t wanna do.

The best part? When I DO make plans with people, I want to do them. I really do. But when they cancel, I’m rarely upset. Hell, I can’t remember the last time I was upset over cancelled plans. For me, cancelled plans usually add up to an excuse to watch Netflix. The other person need not feel like they let me down, because they didn’t do anything wrong.

Now, don’t use me as an excuse to be a dick to your introvert friends. They need love. But do remember, sometimes, cancelled plans are the best plans.