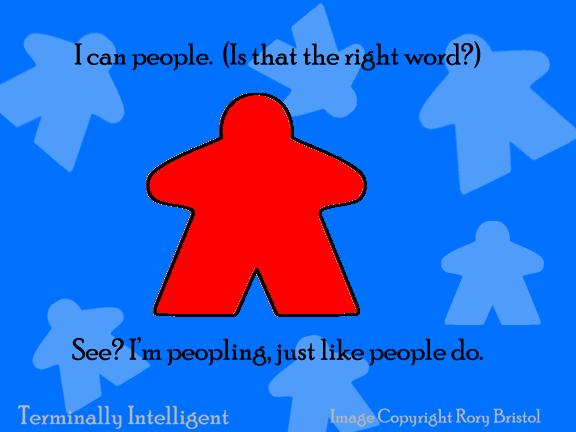 I went to our friends’ annual Pie Party last night, and had a blast. I love this party. We don’t celebrate the harvest, or Halloween, or anything. This was just a group of cool people getting together. [Note, this wasn’t a Pi(e) Party. We save the math jokes for Pi(e) Day in March.]

As per usual, I was excited to go to the party until we were ten minutes away. It was raining all afternoon which always scares the crap out of me, but I wanted to go to the party! When we got close, I started running dozens of play-by-plays in which everyone decides they hate me, or I get killed for being “rude” to someone who doesn’t have a sense of humor.

Then I got there, ran into a friend I hadn’t seen in ages, and sat at a table with gracious folks. I saw a couple of them the week before and joked that we had set a record. Seeing Jenny and I twice in a month is a big deal for us these days! I settled in for fun and games, and hours flew by.

Finally, Jenny stopped trying to be subtle, and told me she wanted to go home. We were tired, fat, and full of sugar, with a long drive home. I realized all at once that she’d been trying to give me the hint for a little while, and I said, “Okay.”

Then, the never-ending march of exits began. Hugs in multiple rounds, conversations started and dropped as I made my way out, and lots of “Hi!-Bye!” flying around. After almost twenty minutes, I found myself explaining to a perfectly nice group of strangers that I had been in a long term relationship with a man before I met Jenny, and I realized that I’d fallen in the oldest trap my brain has: the anxiety babble.

My need to placate the guilt I feel leaving a party early (four hours after it started—God, I’m getting old), mixed with the anxiety of being confronted with a wall of people I hadn’t seen come in, added up to me saying whatever came to mind, and then explaining things in way more detail than necessary. The vicious cycle, once started, leaves me in a time-loop of mental paralysis while I watch my mouth talk non-stop while trying to figure out how to leave.

At some point, I took my hair out of its bun, and someone started braiding my hair. It was a great braid, considering I barely have enough hair for it. (If you’re reading this, girl, thanks for the bobby-pin. My hair still looked great when I woke up!) So, here I am, talking up a storm while someone is primping my hair. Jenny had been swooped in on by someone else, and I had no escape plan. Shit.

Thankfully, the wonderful lady fixing my hair gave me a quick squeeze and I felt my hair. She said, “I braided it.” I took the opportunity to break from conversation. Escape! I hugged her, then turned to show everyone my hair. Jenny finished with the gracious attentions of the host, took my hand, and we fled into the night, not looking back.

Well, that is, until I realized I left my drink on the table. I sneaked back, slipped in, and held me finger to my lips. I made a silent “shh” sound, grabbed my drink, and waved a quick goodbye at the two folks who had spotted me. They grinned, yelled, “Bye!” And I was off again.

It had been a long process, but we had left the party. I’m so glad we went. But looking back at my past party-going, I realized something. I have always been terrible at leaving parties. Either I stayed so late everyone fell asleep, I left as soon as the first person headed for the door, or I found myself in the talk-explain-talk-explain cycles of How-the-hell-do-I-leave.

Maybe I should work on that. Meh. I’ll go to Costco. I need food.