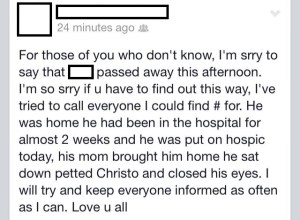 So, work for the season hasn’t picked back up. My boss took Christmas off, and gave us all a holiday. Fun.

I had expected to be working yesterday, so when I realized I had the day off (I never thought I’d be sick of days off…), I decided to work on the wedding invitations. I spent literally all day drawing. Then inking. Then drawing. Then erasing. It got repetitive, but I think it’s coming together. I can’t share the art with you, of course, because it’s a surprise for the recipients!

Don’t worry, I’ll share the art in the future. It was too damned much work to not show it to people! In any case, I have no idea what went on in my head yesterday. I interacted with almost nobody, I checked math and had a single meal all day. I didn’t have to gauge my mood at all, because I didn’t have to do anything I didn’t want to do, which is nice.

It didn’t last, however. Once I came out of the fog of creativity, I found out that a friend of mine passed away somewhat unexpectedly. This was a very close friend, but one I haven’t seen in some time. He’s been treated for cancer the last couple of months, but he was doing well. The last week has seen a marked decline in his health, and today he was released to hospice care. When he got home, he hugged everyone, snuggled with his dog, and closed his eyes for the last time.

Mood evaluation took over the evening, and I finally just went to bed sad.

It’s going to be a long day, methinks.