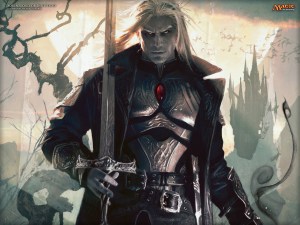 Image: Wizards of the Coast

A friend of mine (“George”) came over to play Magic: the Gathering with me and the Boy. Before we started playing, I set the expectations: He would most likely lose, and we would be “mean” to him, because that was how you win in Magic.

I picked out my favorite three decks, and passed them out. The first round, the Boy had to reestablish his mastery of the game. He hadn’t played in a while, and didn’t know what to do. We took it slow, and he got his confidence up as we wrapped the game up. Because George and I focused on each other, the Boy was able to make it through the first elimination. I still won, but he didn’t just get destroyed right away.

The second game, though, was completely different. George and I continued to fear each other as the Boy got himself established. George and I managed to set it up so that the Boy took us out in the same turn. We were both flabbergasted by what had happened. Neither of us had taken the Boy seriously enough, and he skunked us good.

I feel like this is a dual punishment. First of all, I made the deck, so it was on par with my other decks. Secondly, I told the Boy that he would lose. His quick wits, a little help from George and I, and he trounced us. I’ve resolved to not help him any more. He should be able to learn from this experience enough to play with a critical eye in the future.

That was my night. I know it’s all mundane and stuff, but that’s part of my growth, I guess. I have to get used to this domestic crap.

In other news, I am completely terrified of our cats. They are just flat out evil. The Girl was holding one of the cats and he went ape-shit (that’s a technical term) all over her body. It looked like she had been attacked by a zombie. See picture below. Then the Girl let the reclusive old lady cat loose on the top floor. It was a terrifying experience for both myself and the cat. She hates being outside of her room, so it wasn’t pretty. I’m just glad the Girl didn’t get another zombie scratch. 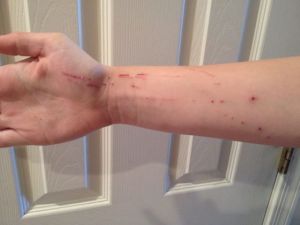