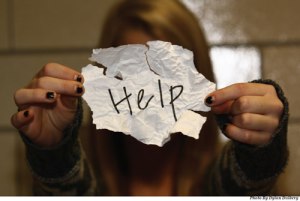 One of the questions I get the most often is; “What does it feel like to be suicidal?”

I think people are trying to understand why I would want to kill myself, not once, but twice in my life. I’ve never had a good answer for anyone with that question. But I’m going to give it a shot anyway, because I want people to understand.

The first thing you should know about people who are suicidal, is that they feel that way for their own reasons, and my reasons won’t necessarily be the same as some other person’s. Don’t ever try to tell someone why they are suicidal, or to tell them “I know how you feel” unless you really have been there. There is nothing that inspires contempt in me more than when someone tells me “I been there, man. Depression sucks.” No. Depression might suck, but being suicidal has nothing to do with depression. They are two totally different things. But I digress.

When I’m suicidal, I feel like I don’t matter to anyone. It’s not that I don’t think people care. I just feel like their lives wouldn’t be changed by my death. It makes it very hard to find reasons not to die, because I feel like it doesn’t matter one way or the other.

I often will think of odd things, like; I wonder how it would feel to cut the end of my finger, or what the viscosity of my eyeball is would it actually hurt to put a blade in it? (Thank you to my friend who shared that you sometimes feels this way… you make me feel so much less alone.) I have to remind myself that it would hurt those around me more than it would hurt me. I have to rationalize not hurting myself, when my whole brain is telling me that I should hurt myself.

The worst feeling is when I realize that I don’t care who finds me. I don’t care who is hurt,  or affected. I can’t believe myself when I rationalize that the kids will be alright if I’m gone, or that it won’t hurt them to find me in the bathroom dead. Those things are never okay. But I think them anyway. I have to nearly physically jerk myself away from those thoughts.

The most insidious part is the anxiety. For once I don’t have anxiety that I will get hurt. My anxiety doesn’t focus on keeping me safe. No, instead it turns me into this quivering mess that thinks that I’m nothing but a burden on the people around me. I’m a walking drain on society, and on those that love me. I’m alone, because how could anybody follow me on such a dark path. How could anyone understand how much I loath myself? How could anyone understand that no matter what I do, I will never feel like I’m good enough to continue sharing air with the wonderful people who inspire me so much. The anxiety takes its toll on me in a way that would make the average poor self image run away in terror.

Then I start torturing myself. I obsess over all the people who would be hurt by my death. Those special people who have taken me into their families, who have taken me under their wings. Those people who trust me to take care of myself, and to be as good a friend to them as they are to me. I repeat lists of names. I pound them into my skull so forcefully that I give myself headaches. When I forget a name, I hold it against myself so violently that I might as well be smashing my hand with a hammer for the amount of pain it causes me.

I dream of physical pain. I need a release. I know that if I’m in physical pain, then I will at least have a reason to feel hurt. What excuse do I have to feel in pain now?! How dare I feel miserable when there are people in the world dying because they don’t have clean water, food, shelter. I’m not alone, so how dare I leave my loved ones feeling alone?! I hate myself more every minute, and cannot believe that I am still breathing, sucking the very oxygen that could be innervating some baby somewhere.

I obsess. I plan. I decide on the top 5 most efficient ways to die. Then I obsess some more. I plan some more. I think about how I could die without anyone I know finding me. Then I remember how many people have told me they would have no closure if they thought I just left. I know that people need to mourn, to grieve. People need to know that their loved ones lived full lives, and that they died happy. Not one person would get that if I killed myself. Like my father, people all over the country would cry out, not understanding that I just couldn’t find a way out.

I understand why my father is dead. It’s not because he was weak. It’s because his burden was so great he just had to set it down. He just didn’t know that someone else would pick it up. I sometimes think that I would be relieving the world of a burden if I died, but I remember my father, and know that I would do nothing but leave that burden on someone else.

There is so much more to say. I don’t think I could ever put it all into words. I will try again, another time. I love you all. Have a pleasant Spring.

Trying to help yourself or a loved one? Try reading Choosing to Live.