Last night was a blast. We had fun eating too much pizza, eating ice cream, and playing games with the kids. After they had adjourned to enjoy the last week of summer break, we busted out Cards Against Humanity. We all dreaded playing without George. It was one of our favorite games to play together. Preferably while drinking. We decided to get it over with, and start feeling like normal, horrible human beings.

At some point, we nearly gave up. We weren’t having fun, and it just didn’t feel right. We decided (by lack of decision making) to keep going. God, I’m glad we did. All hell broke loose with this combination: 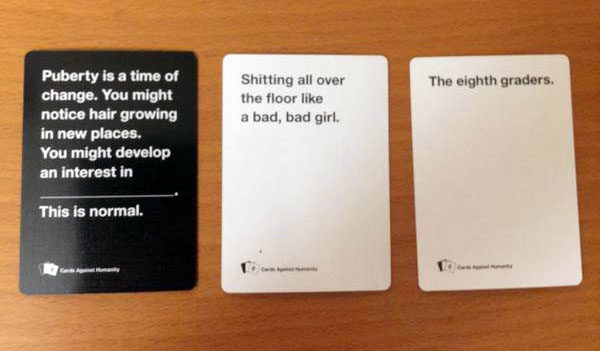 Guess which answer was mine?

It broke the tension so hard. So hard I thought we’d all laugh until we split our sides. Later, another card made Jenny and our other friend laugh really hard. I loved the card, but gave them this quiet are-you-done-yet look until they settled down. Then I whispered, “bad, bad girl.”

That was it. The tension was so damned broken by that point, I wondered if I’d ever stop laughing. It felt good. It felt really good. Sitting down with two amazing people, playing an intimate game of horrible everything, and laughing at how horrible we actually aren’t. It was great. I was still depressed, but I felt like my soul had seen some of that magical stuff called “sunshine”. It was just what I needed.

The tears came back later, but they came with a smile for the red-faced laughter that George would have been wearing for twenty minutes after that card had been played. It wasn’t quite so terrible, somehow.