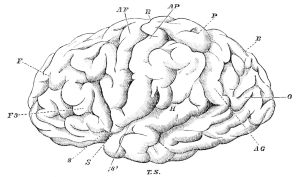 Fissures and Convolutions of the brain. Image from: http://commons.wikimedia.org/wiki/File:PSM_V27_D079_Fissures_and_convolutions_of_the_human_brain.jpg

With all the vivid dreaming I am privy to, I get to see whole chapters of my life laid out in a whole new light. Sometimes this is good, but sometimes it’s bad as well. Mostly, I remember things long since forgotten, and I can’t forget these things again. Don’t get me wrong, I love getting parts of my life back that I once thought were gone. But, it can be a bit of a burden.

Last night I had a dream that my unnamed friend’s unnamed father came into the house and started shutting off the power, blocking the windows and telling us all to be quiet. Level of paranoia runs super high, and the dream ends leaving me feel wound up, and tense.

This is just a small example of what’s going on in my dreams. The correlative memory is one from when I was about fifteen. My mother saw a piece of white garbage in the woods near our house. She spent hours watching it. She was convinced that it was really a spy camera put in place by the federal government. Want to know why the federal government was “after” my mother? She was one hell of a meth burnout. Welcome to drug induced paranoia, just the right kind to exploit every minor anxious thought in your children’s heads.

See why I wouldn’t want to remember this? Nobody wants to think of their mother as a deranged drug addict acting on paranoid delusions. No child can feel safe in that kind of situation. It quickly became a relief to me when my mother would be gone for extended periods of time. It meant that I was the only one dealing with mental illness in the house. And let me tell you, I handled myself a lot better than my mother did.

I’m not trying to be all “woe is me” by any stretch. I just want you all to understand that memories like this are a whole new experience for me as an adult. One of the blessings of PTSD is that I don’t remember things that are negative.. most of the time. In the past, those memories would go away. I guess I’m past that luxury now, though.