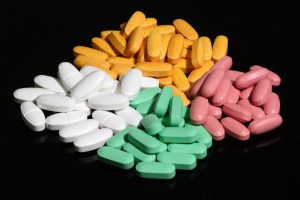 Piles of pills. A never ending mountain of medication.

Last week, my doctor told me I won’t be seeing her anymore. This was expected, because she is a pediatric doctor, and she was a temporary replacement for my last doctor who just up and quit. It went well, I guess, with one caveat. She suggested I alter my drug routine.

I SHOULD NEVER FUCK WITH SHIT THAT WORKS.

I moved my anti-depressant to mornings, hoping to do more combat with my afternoon dives. No such luck. Instead, I got a week’s worth of crippling nightmares that have made it impossible to do shit. In the end, I switched back, and I slept like a god-damned fairy tale ending. I even woke up at six, and didn’t immediately fall back asleep!

But the nightmares. Fuck.

Most of my dreams for the last 15 years have been “extended nighttime flashbacks.” I wake up drenched in sweat, screaming, crying, and sometimes – bleeding. I have clawed furrows into my face, my shoulders, my arms, my legs, and strangely enough, my armpits. I have woken up swinging, breaking things. Sometimes those things were furniture, sometimes, though, they were my fingers. Long story short – my nightmares SUCK. But I’ve almost always dreamed about REAL THINGS.

This last week has been filled with (I don’t have a word here… think of the most horrible thing ever, like the Holocaust – but worse, if possible). It has all been close enough to the truth to make it really sink in. My brain is the only thing in the universe that can make my mother someone worse than she actually is/was. I’ve been irritable during the day, and pissed off at night. I have had a terrible time waking up, sometimes falling asleep 5-6 times each morning. Know what that means? I bet you do. 5-6 extra hours of crazy-in-mah-head-hole.

There is nothing like the shit your brain can do to you. NOTHING. Your imagination is the worst thing that can happen to you. It doesn’t always work that way, but all too often it does. That’s what mental illness is about. What is your brain doing to you, that you don’t want it to?

My brain is a very good liar. So is Jenny Lawson’s – she talks about it in her post entitled Depression Lies. It’s a common thread. It’s what we all have in common. Our brains are lying bastards.

My brain tells me that I’m ineffectual, embarrassing, or worse – that I embarrass others. My brain doesn’t tell me I’m weak. I makes me feel weak in every tiny way possible.

That was rambley (which is totally a word). What I’m trying to say is that I had a week of the worst possible kind of nightmares. My personal Hell, custom made on site, for my convenience. I would literally rather be flogged naked by a bundle of nettles soaked in vinegar, and then be rubbed down with salt and alcohol (alternating between the two). I would actually prefer my testicles be squeezed out through my penis, stuck full of pins, and left to decay on my body.

Know why? Cause it would be so, so easy, for me to say “Aha! That’s where the pain is coming from!”

And that would be heaven.

P.S., I’m not suicidal, I’m just struggling right now. If YOU are suicidal, call someone. At the very least, call the hotline: 1-800-273-TALK. Your brain may be a lying douchebag, but don’t let that cocksucker (no homo) take your life away from you. It gets better. You are worth the effort. I know it’s hard (I REALLY KNOW). Trust me though, you matter.

P.P.S., I love that my spell check didn’t recognize “douchebag” but it was just fine with “cocksucker” (no homo).