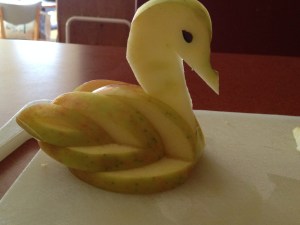 Look what I can do!

This weekend was a blur. I have been doing crafts, including making an apple swan! But it came with a price. I’ve been manic, which sucks. Last night I was up until 4am. Ick.

I tried to sleep, really, I did. I’ve just not been nice to my body the last few weeks. I keep going to bed really late, and waking up really late. It makes me unproductive and it makes me act weird.

In the end though, I slept. I’m tired, but doing stuff. It always worries Jenny though. She never knows what to do with me when I’m manic. She’s afraid (with reason) that I will hurt myself, or do something stupid. Thankfully, neither was the case last night.

On the upside, I’ve been doing really interesting things, like make homemade breads. It’s awesome. Also, my (unrecognized) mania resulted in a night sleeping in front of the fireplace being all cuddly with Jenny. It was cozy and nice.

Today, I’m groggy. I will still go on with my day, and try not to nap. I’m hoping to have friends over for game night. We will see if that works out.

Have a good Wednesday, folks.