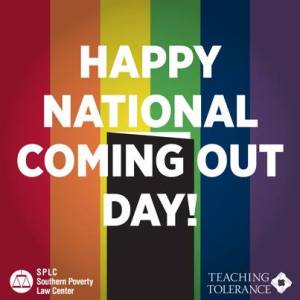 Many of you will be confused by this post, but stick it out, and it will by (kinda) clear by the end.

For the record, today is National Coming Out Day. It is a day for people around the country to support those people that are important to them. Eight years ago today, I came out to my friends and family. I had broken up with my girlfriend, and I had thought about it for years. I was gay, and I was okay with that.

First things first: context. My brother came out a couple of years before I did. He was promptly kicked out of the house, and he moved back to Oklahoma, to live with my grandmother. My step-father had absolutely no tolerance for “that kind of bullshit.” It was abrupt, and for the rest of my high school career, I associated “coming out” with being torn away from the person I cared most about in the world. I was terrified to talk about it. I mean, how do you go about taking the risk that everyone you know won’t love you anymore because of who you are inside? I decided it didn’t matter. People had to love me for who I am, and that was that.

I told my friends first. I went to one of my friends, and told her. I then told her I wanted some help telling my best friend. She agreed, so I called him, and he came over. I worked myself up. I was nauseated, and I felt like the world was going to end. I had two panic attacks, and I was super jittery by the time he arrived. When I told him, his jaw hit the floor. I am still amazed at how shocked he was when I told him. A mischievous look on his face, he said, “You are still my brother.” I cried.

Emboldened by the support I received from those two friends, it all came out in a torrent after that. I told EVERYONE. One of my coworkers thought I might be lying, because I talked about it so much. It was just, liberating. Keeping that to myself for so long was physically painful sometimes, because I yearned to be honest about myself. It was like taking of chains, laying down my cross.

When I met my ex-husband, I fell in love right away. And for the first time, the person I was pouring my love into didn’t take advantage of that. Except that he did, in a whole new way. He took advantage of me financially. Did you know that you can be abused financially? I didn’t. I finally kicked him out when I couldn’t afford to feed myself anymore, because he was eating my $75/month food budget faster than I could earn it.

We separated for about 7 months. Then I moved back in with him, as roomies, after my next relationship fell apart. I proposed within a month. Then I became the abuser. Long story short, I didn’t take care of his needs, in any way. I bullied him into doing whatever I wanted us to do, and he let me, because he loved me. But he never stopped abusing his mother, father, and myself with financial needs. He simply wouldn’t take care of himself. When I got my diagnosis, and started treatment for my bipolar disorder, I realized what was going on. We were both being abusive. I tried to talk about it with him, and he assured me that “that’s how couples work. We both help each other.” He couldn’t have been more wrong. I left, and moved across the country.

I took a break from relationships, and did some honest dating. It was liberating to be able to keep my emotions in check, and try people on for size before diving in. I had learned my lesson. That’s where Jenny came in.

I had my eyes on her for a couple of weeks before I made a move. When I did, it was returned, with interest. Me and Jenny got on like peas and carrots. (That was not an intentional reference, but if you got it, bonus points. I nearly spit Sprite all over my screen when I realized what I had typed there.) It was love at first nibble (I couldn’t resist her cute little earlobes). Oops, probably TMI, but what the hell.

Jenny took everything in stride. My mental health, my past, my family, everything. We had been dating ten days when she drove with me across the country to go to my aunt’s funeral. And she took it all in stride, even though my family was mostly a bunch of douche-bags about it all.

There was only one hitch in our giddy-up. And it took me a while to figure it out. Finally, Jenny just told me. I was still saying “I’m gay” to people. I was like, “so?” I didn’t see the problem. She did, though. She explained to me that it was confusing for her to be dating me, while I was waving a big I-like-dick sign over my head. I explained that I still think of myself as gay, even though I am extremely attracted to her, and in love with her, yada-yada.

We’ve both come to terms with the odd definition of things. But I still love the look on people’s faces when I introduce her as my fiancé, and then later mention my ex-husband. Classic humor, in my book.

In any case, I’m glad I can be honest about who I am. Telling my circle who I really am changed me forever. I’m glad it did. I’m also glad I have such an amazing woman in my life, and that she will be my wife on Coming Out Day next year.

Anyway, the previous 1,155 words add up to this: If you are gay, don’t feel alone. There are more of us than you know, and if you do come out, you will be amazed at the people who come out of the wood work to discreetly tell you about themselves. Respect their privacy, and you will have a friend for life.

If you are not gay, listen up too. Take a moment to post something to your Twitter, Facebook, or Instagram. Tell your friends that you support who they are. Take the time to make yourself a safe place for your friends, and they will cherish that for the rest of their lives. The support my friends gave me that first day has never left me. That support started the chain reaction of love and compassion that makes me able to write this blog.

Take care of each other dear readers, and carry on.