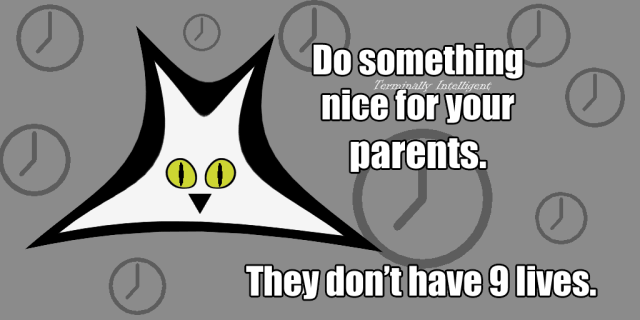 My father was a kind dude. A little odd, a little too loose with the law, and terrifyingly racist, but a kind man. I didn’t know him as well as I’d like, but I did have a relationship with him. He died just over four years ago, and his funeral was a wake-up call for me.

I went to honor a man I’d called Daddy all my life. Up to that point, I thought I’d had enough of a relationship with him. When I spoke, though, I didn’t have a lot of stories to tell. I have gallons of memories of sitting with him, fishing, talking, working, so many memories that fill my heart with love, but aren’t easily shared. As I listened to his friends speak, though, I learned that my father was a deeper man than I’d ever known.

I learned that I wanted more. I wanted my Daddy to come back and tell me more about his life. I wanted to tell him we loved him, even though we lived so far away. It wasn’t his fault our mother moved hundreds of miles away. I loved him, dammit.

We already talked every day by then. We already checked in with each other. But after Andy’s mother died, he was more alone in the world. He has credited me with being there for him when he needed it most. I’m honored that he thought me worthy at the time. I was able to be there for him as he recovered, and learned to accept his grief.

Then I got the worst call of my life. My Grandma called me to tell my that my father had died. I didn’t have much of a support network at the time. My then-boyfriend was at a loss as to what to do, but I figured I’d handle it alone. It was one of the hardest weekends of my life. Thankfully, my many brothers and my sister were there for me, and I was there for them. We mucked through it.

When I flew home, I got some bad news. My boyfriend’s dad had cancer. A week later, his mother was in a car accident, and a few weeks after that, she fainted at the bank and was hospitalized. It was a crazy summer. By my birthday in August, I needed a break. I went on a weekend vacation with my brother and some friends to just chill.

A week after that, I found out that our bills hadn’t been paid in months. I had faithfully given my boyfriend’s mother the rent and utilities, and she hadn’t paid the bills all summer. My relationship with my boyfriend had been suffering for most of the year. I just couldn’t do it anymore. I left.

I moved to Arizona, with the help of Zooey, the magical friend of mine who provided a plane ticket when I couldn’t get one. I moved over a thousand miles away. I moved in with Andy. I got a job, started college again, and found the best friend I’d known to that point.

Over time, several people told me I looked like Andy. We’d jokingly introduce ourselves as “Dad” or “son”. It stuck. At some point, I told him that I did feel like he was a “dad” to me. We discussed it. Then we took a break. Then we discussed it again. It just felt right. I started calling him my dad all the time, and we care for each other very much.

Now, my Dad will never be my Father. He’ll never be “Daddy.” He can’t go back and fill the gaps, and he can’t make me miss my Father any less. It still hurts when I think about him. But it is nice to have a friend like Andy. Someone who cared enough to take me in when I was down. Someone who has cried on my shoulder, too.

I can’t go back and do nice things for my Father. It’s too late. I still have a strained relationship with my mother. We’re working on that. But I can do something nice for my dad. I can make his life better, just because.

Just because. If you need a reason bigger than that to do something nice for your parents (or kids), then take a hard look and see if you can reach out, or accept the reach from them. It might be worth it. Your call.