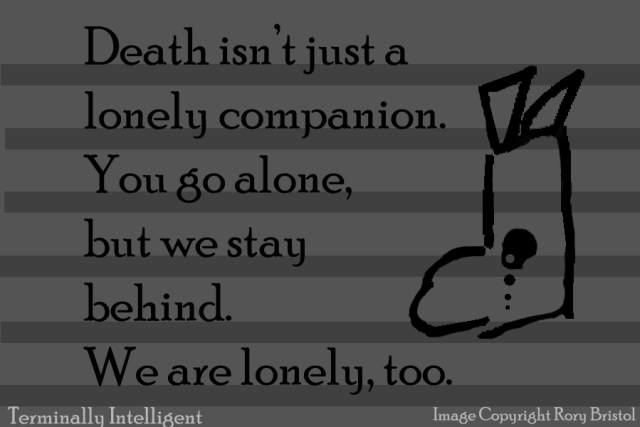 I don’ t even know where to begin. At therapy yesterday, I received a message from George‘s mother, asking that I swing by and check on him. This isn’t an unusual request. He’s long since accepted that I would just show up sometimes to make sure he was okay. My therapist’s office was about, I dunno, a block and a half from his house, so I said “sure” and went over.

I knocked on the door. I called into his (slightly open) window. I got no answer. I knocked for another few minutes, and finally realized that knocking wasn’t going to do it. His car was there. His roommates’ cars weren’t. I really wanted to just go in. But, of course, there are trespassing laws and stuff, and I’m not on a come-on-in basis with his roommates. So, I did the only rational (and most responsible) decision possible. I called the police, and requested a wellness check.

In case you don’t know, a wellness check is when an officer (or a few of them) go into a person’s home without a warrant because of justifiable belief that the person who should invite them in, well, can’t. I answered a bunch of questions about when he had been seen last, about his recent personal and professional life, and then they went in. It turns out, one of the roommates was home, but didn’t hear me knocking over his video games. 100% understandable, and I am not being sarcastic, that’s a thing, and it’s totally valid. #HermitLife

The roommate invited us in. The officers knocked on George’s bedroom door, called out, etc. No answer. They went in, saw him in bed, and called out some more. I looked in. He looked like he was sleeping. He was laying in his bed, looking just like he always does when he’s asleep. Except he wasn’t breathing.

The officers had the roommate and me leave the house, and we talked with a lot of officers and a detective, and stuff happened. They were kind, professional, and were seriously the nicest folks on the planet. I think I may bake them cookies, and that’s not a joke.

An officer drove me to George’s parents’ home, and I had the saddest honor of my life. I broke the news to them in person. For the rest…. Well, I’m going to leave that alone. Not my story to tell.

What I came here to say is this: Call you mother. Tell her you love her. I am going to today, and that’s not something I normally do, for a variety of reasons. *cough, cough* Call your friends. George was not an old guy. He was not even middle-aged. He just died. Don’t assume everyone knows you love them. Tell them, goddammit.

Goodbye George. I wipe a tear from my eyes as I type this, but I love you, and always will.