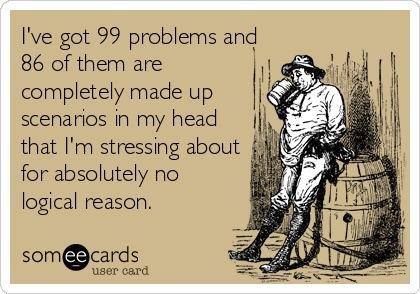 Image taken from Facebook. If this image is your intellectual property, please let me know, and I will remove the image, or credit you.

So, here is my second in a new series of responses to internet memes dealing with mental health. Enjoy:

So, living with anxiety is something a lot of people with mental health issues have to deal with. For most, it fits into the normal routine. For a small percentage of us, we live our days around our anxieties. See Jenny’s account of her own anxiety here.

My personal anxieties mostly revolve around paranoia. “Did that person take something I said the wrong way?” or “Did I close the downstairs bedroom door? Oh God, what if I shut the cat in there?!”

This may seem like something to take lightly. People can brush it off, right? Just logic their way through it, until they are better on the other end, yeah? Not for some of us. My anxiety makes me physically ill. I get heartburn if I’m too anxious about something I can’t check on. I have explosive diarrhea if I’m put under stress that validates my anxiety.

An example: The other day, I was really anxious because I couldn’t find the cat. I assured myself that it was, in fact, fine. Surely, I didn’t accidentally kick him down the laundry chute. I was also sure I didn’t lock him out of the house. I got super involved convincing myself that the cat’s disappearance wasn’t my fault. Seven hours later, Jenny texts me from the bedroom informing me that I had, in fact, locked the cat in the closet while getting something out of it. Yep. I had heartburn all day while convincing myself that it wasn’t my fault, then I got the depression that follows finding out that I had something to worry about all along. Wanna guess who spent 15 minutes in the bathroom, which had to be followed by a shower? This guy, that’s who.

I also get twitchy, and react strangely to things going on around me. I will be so caught up worrying about some trivial thing, that I will neglect the fifteen other things that are actually going wrong. Not only that, but I will create moments that cause more anxiety.

Friend: “What did you think of the play?”

Here I have only heard part of what was said, and my brain filled in the other details from my current obsession. In this scenario, I’m thinking:

“Are the pears at home going bad? Will there be bugs in/on them when we get home? I wonder if any studies have shown that storing them at room temperature will cause cancer… I probably shouldn’t say that to Jenny. I don’t want her to think I’m trying to give her children cancer by encouraging them to eat room temperature pears in the effort to make sure they get enough fruits and vegetables in their daily diet. Oh, God. She’s going to kill me. Why am I trying to give the kids cancer? I’m a dick! This must be why I hate pears. Seriously, what is wrong with me?”

Insert friend: “What did you think of the play?”

“Oh shit, why did they bring up pears? Are they trying to catch me trying to give the kids cancer? I better say something positive about pears!”

Now I have taken a completely useless train of thought, and made it into a real life awkward situation, simply because of my anxiety.

A few choice phrases that have made it into my daily conversations because of anxiety:

“I guess it would itch, but would it be worth it anyway?”

“My chiropractor says I shouldn’t really do too many sit ups.”

“Yeah, I guess semen could taste good, but only if you had a good diet.”

All of these were non sequitur. I remember them all vividly. Do you know why? It’s because I have turned these phrases (and many more) into new anxieties that exist in their own right. I worry so much about the things I shouldn’t say, that I end up creating a whole new situation in which I have said something I shouldn’t say.

I have plenty of things that are validly worth worrying about. If/when/how am I going to get a job? Things like that.

Instead I obsess over the fact that my father had his first heart attack at nineteen. “Of course, we can’t really count that he was likely on drugs, because we don’t really know, do we?” Or the fact that more than half of my family is diabetic. “I’m totally going to be diabetic, because I had a god damned brownie! Why do I always eat so much mayonnaise? Maybe I should stop eating. Yeah, no sugar is good right? Wait, what if that makes it worse? My grandmother lost a bunch of weight, and then found out she was diabetic. Maybe that will happen to me!”

This runs so much of my day, that it’s hard to focus on, say, whether my boss likes the presentation I just gave. Or whether I complete it on time in the first place. My anxiety has a life of its own, and there’s nothing I can do to stop it!