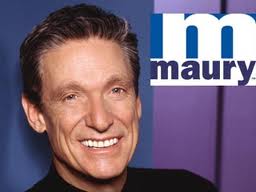 Often, my parents would disappear for long stretches of time, days, weeks, and over a month more than once. While they were gone, we steadily learned a bit of confidence. We stopped being afraid that they would be home any second. This led to some serious abusive situations, in which my step dad would beat us all because the dishes weren’t all clean when he got home, or the laundry wasn’t folded. We were responsible for keeping the house clean and tidy at all times, to the detriment of our health and education.

One of the things that we did when we weren’t afraid they were coming home at any second would be to watch a single episode of television. Growing up, there was a show I despised. It was called Maury, hosted by Maury Povich. My mother was convinced that children’s shows were evil, and that diversity was wrong. We didn’t know any better, so we watched adult shows.

I can remember Maury having abused kids on his show. They had been beaten, molested, you name it. We would watch these episodes, and mock the people being interviewed. “What  a bunch of pussies.” “They are so spoiled! ‘I have no heat at home.’ Cry babies. I bet they’ve never been locked out of the house while it was snowing. They have their priorities all wrong.”

See, in my house, it was normal to carry buckets of water from the neighbor’s house to flush the toilet, because our water was off. We would also routinely microwave our water because we needed to wash dishes. We took cold sponge baths, and didn’t mind it. We took so much crap as a part of everyday life.

I can remember my mother breaking wooden paddles and spoons and things, trying to leave “enough of a blister that we’d remember it.”

In short, my parents were such sick, demented people, that I thought the abused and pitied people on the Maury show were just weak. After all, we’d lived through our entire house being condemned because of black mold. I had woken up every night of winter at 3 am to feed the fire, so our house wasn’t cold. Those pitiful people had no idea what life was really about. I was ashamed to live in a world where people were such wimps.

Of course, now I live in a “first world” family. I know the luxury of hot water, and constant connection to the world. It means so much to me that I have REAL conversations with my kids. It makes my day every time one of the kids hugs me. Know why? I don’t scare them. They don’t respect me because I’m a monster. They respect me because their safety and happiness are my number one priority.

I pity my parents. They fill my nightmares, and left my many siblings scarred and broken. My father is dead, and my mother is insane. I will never have a relationship with either of them. Now, I am committed to being the parent that they never were. My thanks go out to Jenny, and the kids’ father every day. They made miracles happen, and I am blessed to be a part of those miracles, every day.