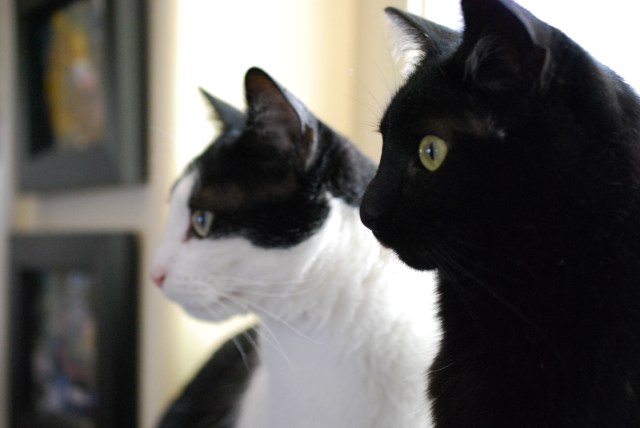 Love to the left, Hate to the right. Image: Jenny Bristol

When someone comes over to our house, they all get the same spiel about the cats. Don’t pet Lavinius, even if he gets on your lap. Just let him get down again, and he won’t hurt you. Pet him, and suffer his rage. Ezra, however, you can chase down, pin against the wall, love, pet, brush, and drag him all over the house, and he will purr the whole time. These are rules for people who don’t live with our cats. The reverse is true for me. I shun Ezra because he eats my houseplants, and knocks things off my desk when bored. Lavinius cuddles me, and hugs me, and holds my hand.

It’s simple. I love Lavinius, and Ezra makes me want to never have a pet again.

I was cleaning up a pet-based mess of some sort, and realized I was judging our black cat Ezra most severely for this evil he had done. Then it occurred to me: I couldn’t know, for sure, which cat had actually made the mess. I decided I was being irrational, and then gleefully blamed Ezra anyhow.

Then it struck me, there is one good reason to keep the hateful little nightmare that is Ezra, the Destroyer of Rory’s Things. I get to blame him when my darling Lavinius does something wrong! I get to blame all of the things I don’t like about cats on the bastard, while glorifying my cute little squishy-faced teddy bear Lavinius.

This now gets to be part of my Bacon Theory. And no, it’s not about #FreeTheBacon (which I neither support nor disagree with). The Bacon Theory is that it doesn’t matter what you are eating; it’s better with bacon on it.

The Bacon Theory comes from when I was on a vegan diet several years ago. I craved bacon the whole damned time. I learned that I was not alone. Many people who are vegan for any number of reasons still eat bacon. Bacon is the #1 irrational food. It says,

“I reject your reality, and substitute my own!”

So now, I add my cat to this category of acceptable irrationality.

Never mind that Ezra is black and skinny. I shall blame him anyhow. 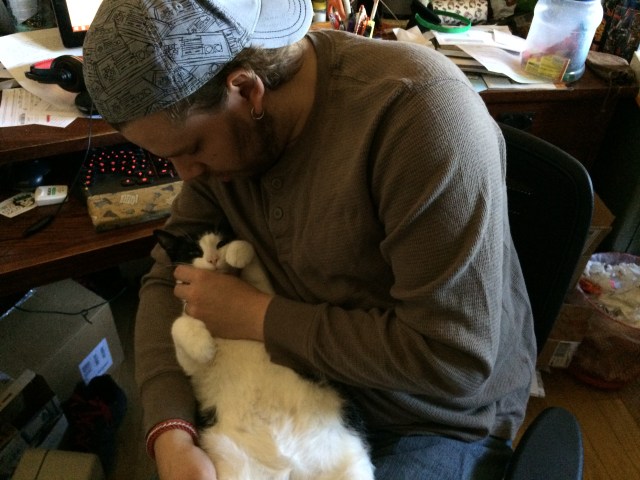 My hat is on backwards for the cat. I am ignoring my messy desk because I get to love my little monkey! Image: Jenny Bristol