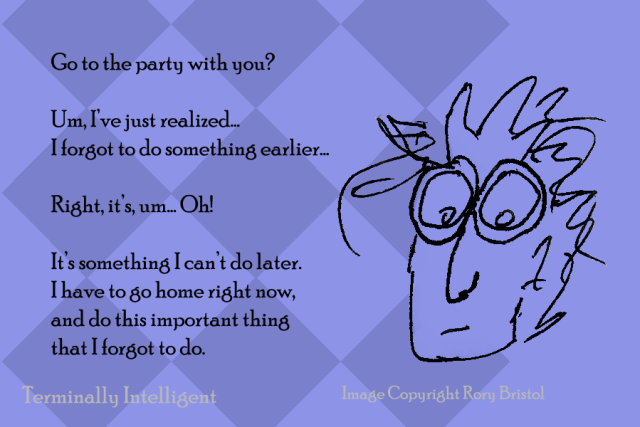 I only do this once a week… in a good week.

Jenny and I went dancing the other night. It was awesome. We ran into some friends, and participated in a class. We learned the Arizona Two-Step. It was fun, but our friends got bored and left, because they didn’t know it was going to be a beginners class. After the lessons, though, we met up with the folks that had invited us.

Jenny hadn’t met them before, but I know them from my work, and they are amazing people. Ruth is fabulous, with a huge personality and joy to share. Dave is the nicest guy, with a great sense of humor and a dazzling smile. Thankfully, everyone got along great, and there was only a little awkwardness when it really sank in that I was going to dance with people I only knew from work.

Jenny and I like dancing together, and don’t usually dance with other people. Most of that falls between hating dancing with strangers, and the fact that I have no fucking clue where my feet are. I get the beat just fine… I just don’t know what to do with it.  We successfully avoided dancing with anyone else until Dave asked Jenny to dance. She went on the dance floor, and I could see that she was enjoying herself immensely. Then I made a big mistake.

I went over to tell Ruth how much fun they looked like they were having. Being completely un-shy, and confident as sin, Ruth dragged me out onto the dance floor. It was hilarious. I have no idea how to lead, so we mostly Two-Stepped in circles, with the occasional spin. I managed to not fall over, step on her toes, or run into any other couples. I call that a success.

I managed to not run away screaming, but there were some not great parts, though.

We didn’t stay as long as Jenny hoped we would. My body and brain were both giving up, and we had to call it a night. On our way out, we complimented the most adorable Polka dancers in the whole world. They were delighted to meet us, and put Jenny and I on a high note as we left.

I think we’ll be doing it again. Next time, though, I’ll have a pill keeper in my pocket.