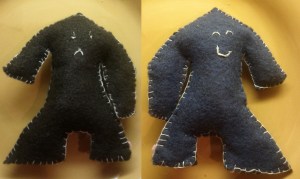 How the fuck does Temper feel? Who gives a shit. It’s been a year!!!

Today is the blog’s one year anniversary. I’m kind of proud of that. It’s hard to keep going with things like this, but I think I have finally hit a bit of a stride. Yay!

Otherwise, fuck off. Not you, I mean my depression. Yesterday I spent a good bit of the day disconnected. It was weird, but interesting. Jenny kept asking me if I was okay (because I wasn’t) and I kept saying I was fine (because I didn’t know I wasn’t). After a few rounds of this, I started talking and pretending to care. She knows about this, but I’m not sure she likes it. She wants me to be honest, even when I honestly don’t know what’s going on. So, whatever, but I tried.

Later in the day, Jenny went to run errands, and my friend George came over. He was running early, so he sat and ate his supper while I talked at him. After a few minutes, I was getting just flat hateful. Not at anyone in particular, just about stuff. I was trashing on my clothes, the furniture, everything I was talking about. It was like everything in my world was slightly wrong. I didn’t realize what I was doing until Jenny got home and asked what was going on.

It hit me like a ton of bricks. I was dissatisfied. I was hating everything. It’s amazing how liberating that can be. I spend so much of my time worrying about the people I’m not good enough for, and how I’m doing everything wrong. I am nearly constantly anxious that I’ve offended someone, or that I’m not quite doing everything to standard.

Interestingly enough, it felt good to be judgmental for a little while. A little critical, if you will. I measured my position on a lot of things, including myself. And I was giving myself a break, without even trying. It was like, for once, I wasn’t the only problem in the world. Politics, violence, the ugly furniture people have put in beautiful homes. It was nice.

I got to hate everything a little bit at once. And it wasn’t all the standard stuff. I didn’t hate the things wrong with my life. I didn’t focus on the things I wasn’t getting, or anything like that. I just had opinions. Strange, no? Usually depression drags me down, and makes me not care. It was intense, and a little overwhelming to care about so much at once.

It was also a little scary. I mean, how much hate can one person have inside of them, without knowing? I had bile for miles. I was able to (inwardly, at this point) spew hate and venom at everyone and everything inside my head.

I got to hate less “politically correct” things, like diseased people, and ignorance. Don’t get me wrong. I don’t have a problem with the people so much as with the diseases they carry… though, I still may not shake hands with them or make eye contact. And ignorance is not stupidity. Being ignorant just means you don’t know something yet.

Not your everyday Iron Man.

After a while, I relaxed. I enjoyed myself a lot. I showed off some of my newer toys (yes, I collect action figures, and play with them). I got to share laughs over some of the more bizarre stuff, and some nostalgia over the vintage toys. I was doing pretty well, until the kids came back upstairs.

One my friends brought his daughter, who jokingly referred to herself as insane. My lips opened and my voice started before I knew there was a thought to be thunk. I told her that I found her statement very offensive, and thoughtless. I reminded her that I struggle to determine what is real and what isn’t on a regular basis, and that insanity is not cute, or glamorous. The silence in the house was amazing. Our house is never that quiet. Even the cats had frozen in place. Of course, all that lasted about a millionth of a second.

I did a quick self-check. “Did I yell? Did I just swear at a teenage girl? What did I do?” Then I realized that I had been very quiet, and that everyone else had gone quiet out of [respect? fear? confusion?]. Jenny and the girl’s father confirmed that yes, I had to deal with that, and they left it at that. I hadn’t yelled. I had said it kindly enough, despite the rage filling the auto-response portion of my brain. It was a teaching moment, and all people need those sometimes, even me. My heart felt like a package of boiling water wrapped in ice. I didn’t know whether to be glad of the companionship my friends were showing me, or to be sad that it had to happen in the first place, or whether to apologize for what I had said. 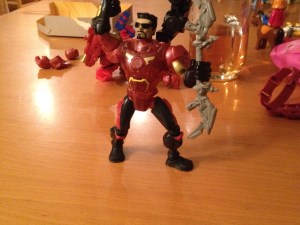 Tony stark, with a “leg-up” from Hawkeye.

Before I could think about it too much, the conversation had started back up again. The girls had gone back downstairs, and a friend was asking me about Iron Man’s removable head. Those are fucking weird toys, as you can see to the left.

Long story short: I had a blah morning, a fuck-off afternoon, a “hey this is cool” dinner, and a “seriously” moment to boot, followed by love and companionship. Nobody brought up mental health again. I felt much better, though. Sometimes, just knowing your friends understand and are willing to support you is a big fucking deal.

So thank you. All of you. The hundreds (close to thousands..) of people who read this blog. You are amazing, and I couldn’t have kept this project going without the comments, tweets, likes, and follows. It sounds cheap and corny, but every single view counts to me. It’s a little flag that says “I’m interested, or at the very least, looking.” It’s encouraging. And except for a notable exception or two, I have gotten so much positive feedback. This post is for all of you. Happy 1 year, guys. You rock.