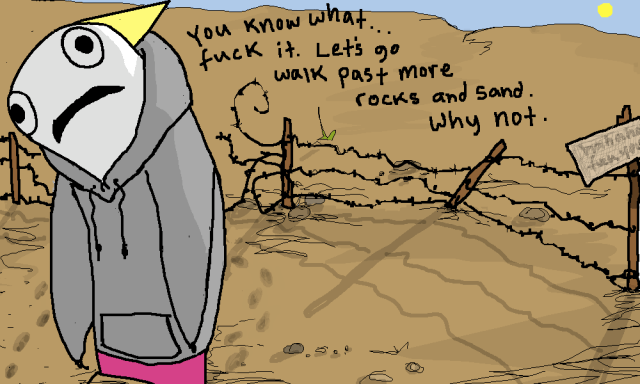 Image copyright Allie Brosh, but I thought it might be fair use because this is the image she shared when she shared today’s post. Please don’t sue.

Years ago, I discovered the hilarious wonder that is Allie Brosh and her blog, Hyperbole and a Half. On a regular basis, I got to enjoy her brand of ridiculousness (“Clean ALL the things!”). I knew she battled depression, but she seemed to manage it at least to a level of being a functional adult. But then she disappeared. Not literally, but internet-wise. No more posts. She wasn’t commenting on other blogs. People who knew her only through the internet were worried and didn’t know how she was doing. She had posted a blog entry entitled “Adventures in Depression,” so most people knew she was spending her time trying to take care of herself rather than entertain the masses. But we still worried.

A year and a half later, yesterday, she resurfaced, posting a preliminary “hey I’m back” post called “Pre-Post Transition Post.” It was a heads up that she would have a longer post with more content today. Her sense of humor was in full force for this one (yay airplanes!), and I got very anxious to read today’s post, which was supposed to explain where she’s been.

Yup. Today’s post, “Depression Part Two,” explained it. She was exactly where I thought she was, coping with life, being depressed. I’ve been fortunate enough that my few bouts with depression were comparatively short lived (weeks or months). But Allie’s been dealing with a long, more dangerous round of it. Not just to the “I don’t care about anything” and “I don’t know how to have emotions anymore” points, but to the point of wanting to die.

This brought me back to the days before we checked Rory into the hospital earlier this year. Fortunately, he managed to communicate just enough to me to help get him to the hospital before he did anything. And I’m pretty sure it was very difficult for him to tell me (actually, I know it was, because he was much farther down that path than he had originally communicated to me—I learned in the hospital that he’d made several plans already, and he had shared more of his darker thoughts). But I’m very glad he did. It looks like Allie, too, managed to muster the courage to tell people, and to get herself to a doctor. And she is now finally at the point where she could put something together for her blog, for us, and I’m guessing mostly herself.

So many people out there live with depression every day. It’s a particularly difficult challenge because it’s hard or impossible for other people to do anything to help. But I’m glad she went to the doctor, and subsequently found her shriveled piece of corn.

Read Allie’s book, also called Hyperbole and a Half. It will make you laugh, cry, and nod sagely.