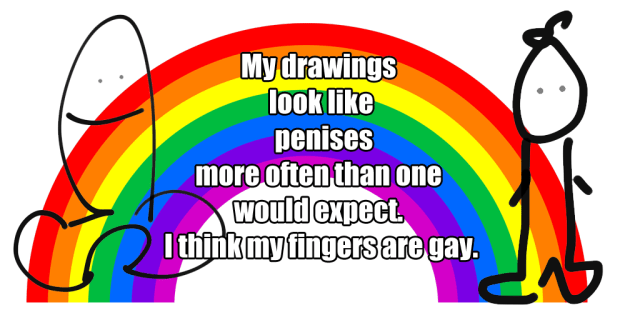 I got an odd email recently, asking why I have just heads on my memes. The answer is easy. My people look like penises. Always. I try really hard for that to not happen, but it just does. It has become so comical that I don’t even consider drawing people any more, because, well, cocks don’t lend themselves to a lot of memes. Well, maybe they do, but that’s an experiment for another day.

In any case, I went to see Dav Pilkey give an amazing presentation in Phoenix yesterday, and the two cute little penises you see above were the result of the inspiration Dav left me with. It didn’t improve. Bonus? I got to have my picture taken with Captain Underpants! 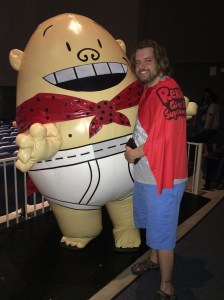 Double bonus? I got to wear one of the capes they were giving the kids, and I was all like, fuck the kids, I wanna be awesome, too! Triple bonus? Captain Underpants has the ability to make me look >thismuch< less fat!

In any case, Dav Pilkey was fabulous, and I got to see videos of him trying to draw while monkeys stole his pen, and I thought, “I need that kind of excuse, guys!” Turns out, he lives on a beach somewhere secret, and has a cave to hide from the monkeys in, and he still chooses to get distracted by monkeys. Good excuse bro. Good excuse. If you haven’t checked out his stuff, DO SO. Underwear is funny, and juvenile humor heals the soul, I swear to God.

I left his show all jazzed. “His characters are so simple!” He started drawing them in grade school, and they look mostly the same, still. “I can do this!” I totally can’t. I drew a few penis people, put my sad face on, screenshotted the bastards, and called it off.

TL;DR: I draw heads because they don’t look like penises, and I pray to God that people like my memes because I do more than leave my dick on the table. Er, screen. I meant screen. I’m going to go to work now…