I got the most amazing Facebook message last night. I had left my God-Damned purse at Taco Bell. The Taco Bell about 69 miles from my house. The manager, who I’m convinced is an angel, contacted an old friend of mine who happened to live in the same city as me, and also happened to know me. She sent me this: 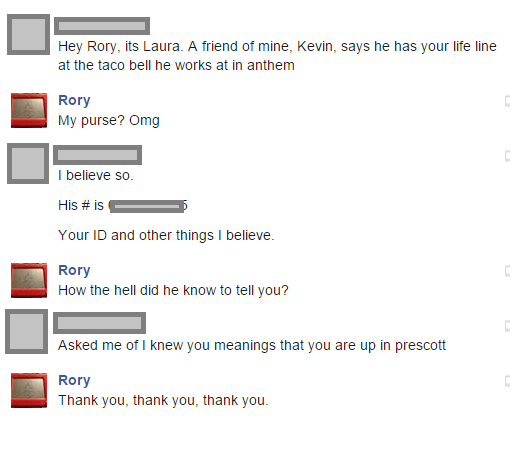 I cannot say how relieved I am to have heard from these guys. I called Kevin, and he offered to lock it up for me. I headed down the hill immediately.

Now, when I say this, I do not mean that I, Rory the inconceivably forgetful, drove down 4,000 feet of elevation. It was Jenny’s unpleasant task to drive the many miles (and hours) to drive down the hill and up again. She was still recovering from the effort of not laughing her Meximelt through her nose when we overheard something I just had to tweet:

I swear, upon everything great and holy that my wife is a saint. She had been telling me, seconds before I got the message, that my memory lapses amused her, rather than feeling like a burden. When I then told her that we had to go back, she didn’t go all Mackenzie McHale:

Instead, she quietly said “you owe me.” She was smiling.  I swore my devotion to her, promised her foot rubs and shoulder rubs, and thanked God for my wife. Today, I will take her dancing and celebrate being able to finish my work before 5pm.