A friend of Jenny’s, named Anne, asked on our Facebook page if I would write about my parents. She was referring to my “natural” parents, of course. You know, those bastards that birthed me.

You see, my parents were capitol-D-Dicks. Yep, I spelled that out, it wasn’t even ironic, I just wanted to make sure you got it, and didn’t think it was a God damned clerical error. Anyway. They were everything negative you could find in a parent.

My father conceived three children with my mother. Then, while she was still pregnant with the third, he bailed. Or, specifically, he didn’t. Make bail, that is. He got arrested for draining oil out of a power transformer, with the goal of stealing copper from it. So, from then on out, my  mother set her lusty, power hungry, stupid eyes on another man.

I’ll go into my mother’s never ending poor life choices another time. The point is, I never really knew my father. Like, at all. When I went to his funeral, I realized every person in the room knew him better than I did, and I told them that. I’ll never get the chance to know him any better, and I mostly don’t care to.

My mother was the Queen Whore of Sheba, and everyone knew it. She chose her men and drugs over the happiness, health, and safety of her children. We got taken by the State at one point, that’s how bad it was. Oh, and there were another six years of me lying to the State, in the attempt to keep my family together.

That’s a recurring theme. My twin and I did everything we could to keep our family intact, because we loved our brothers, and we didn’t want to lose them. I ended up lying to the police, our teachers, principals, social workers, you name it. We thought being together was more important than being safe.

That was the biggest lie my family ever told me. Now, don’t get me wrong. Family is one of the most important things in the world. But you know what’s more important? Making sure they don’t starve. Making sure your spouse doesn’t break their bones, and degrade them to the point that they consider killing themselves because they just aren’t good enough. Safety, folks. The safety of your children, your siblings, your spouse. You name it. Safety is more important than happiness any God damned day.

You know what the sick part is? I still want a relationship with my mother. I want her to tell me the truth, so I can finally forgive her. I want her to apologize, and mean it, so that I can finally bring her back into my life. I want my father to be alive, so I can talk to him one more time, and tell him that I don’t hate him, and that he isn’t the worst person in the world. I never told him that he was, but I know he thought those things.

I’ll never have that mother. I’ll never know that father. I will always be patching the holes with my new family, but also be aching for them to waltz back into my life. I would literally kill someone to have my mother be even one step closer to sanity. I would kill myself if I knew it would send my father to Heaven.

But part of me would throw it all away for five minutes in the arms of my parents, safe, warm, and happy. A big part. If I weren’t medicated, I’d probably be living with my mother again. Or I’d be dead, because of the fear of that prospect.

A part of me is already dead, but I don’t miss it. Because it died so, so long ago. 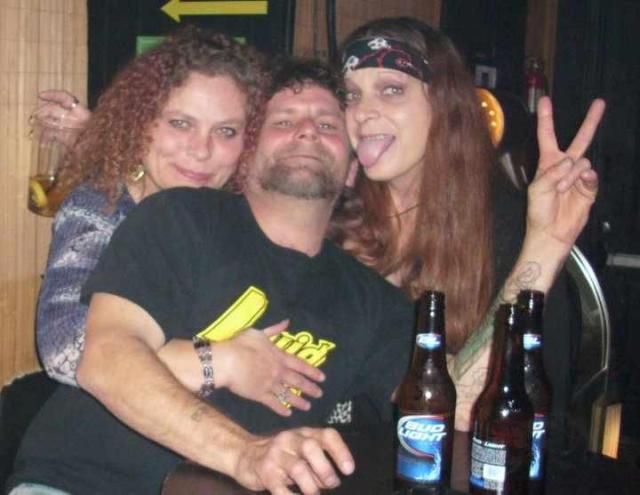 My father, and a pair of his women. Either of them could have been my mother, but they weren’t. I don’t know if that’s a good thing, or a terrible one.

On the off hand that your family isn’t as insane, and clinically toxic as my parents were. Try this on for size: